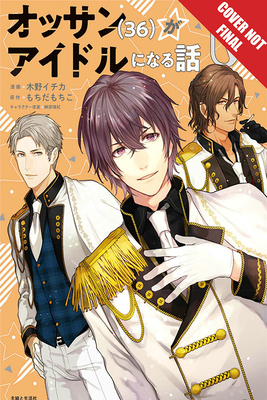 World watch out! These middle-aged men will take the stage and woo your hearts!

I recently requested and got accepted on the 2nd volume of this manga. Of course, that meant I had to find the 1st volume before I could start the 2nd one. Thankfully, it was easy to get!

I love idols. Most stuff I read or see is about girl idols though, with the occasional guy idol group in the mix. However, most these boys are either teens or early twenties with a couple that are maybe close to thirty. However the boys in this group are all well into their 30s. So this is a fresh new look for me at least. And I can tell you that I was enjoying this manga a lot.

This first volume sets the base for the story. We meet the characters, see their motivations, see Miroku become awesome, see them start. I cannot wait for the next volume which I hope will mean some more singing and dancing as that was missing a lot from this one.

I loved Miroku and I think it was inspiring and awesome how hard he worked. How he trained hard to get to where he wants to be and to feel better in his body. Yes, on the cover Miroku looks all trained and tight, but believe me, for the first part of the book Miroku is overweight. He struggles a lot with it. Not just when he was at school, but also at his first job. I do feel it was a bit weird at times how he was drawn. I mean, he is 1.90, but for most we don’t really see that he is that big, there is one scene that clearly showed he was tall, but for most he was just small and round.

For most of the book we are following Miroku as he accidentally uploads a singing video, become a model for a day (and also meets up with a certain someone), we see him become friends with the two guys with who will become the other members of the unit, and there are some other things. It was definitely fun to read, though I was just eager to get them together and have them sing and debut (and more than just one performance). Haha, I am just a bit impatient. I am happy with this volume, it sets a good base, but I wanted more.

I am curious how things will continue in the next volume, the guys get a very awesome offer. Which seemed a bit over the top given they only performed once, OK, it was a very OK-looking performance (I so need sound to go with my manga), but still weird. Haha, conflicting though, I am also quite proud of them that they managed to get so far.

The art was OK, I am still not sure how I feel about Miroku’s design, the other two guys look pretty OK, but there is something off about Miroku. Maybe his hair? His eyes. I don’t know.

All in all, I had fun reading this one. Middle-aged idols, yas! dances