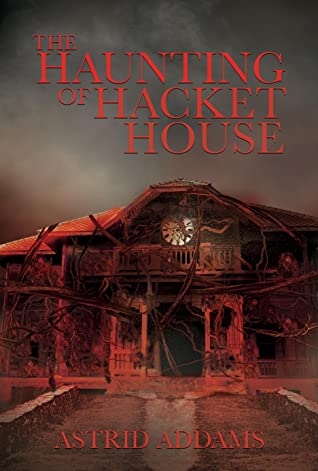 A spooky house, strange things go bump in the night… sadly this didn’t end up to be a like for me.

The beginning was amazing. We see a man running for his life. Shadows stalking him. A man dead somewhere. And then we go to three years later and meet our MC, who is on her way to Hacket House to take care of an older man there who cannot do anything himself (btw I had my suspicions on who the old man was early on). The house was an immediate NOPE no thank you and with each day she stayed there I got more nope. There are creepy clocks everywhere, at night shadows come to play, there is some kind of weird woman walking through the corridors, the staff acts suspicious, the garden looks like a nightmare, and strange things happen at night. I would definitely NOT have stayed no matter how many books you would bribe me with. I am sorry. I would have left within a week. I would feel very sorry for the old man, but sorry, I don’t want to stay.

The village seemed strange from start but it got quickly disturbing and wtf and I wonder why anyone would want to live there.

There was a subplot (or at least it felt like that) about our MCs baby. About what her husband did. About why she is running. It came out of nowhere and felt really not well written. At times we would be deep into spooky things and suddenly BOOM Rowena talk again. In the end apparently this plot is important but it sadly never felt like this for me. It just felt forced and weirdly put in the story. It could have been so much better, more fluid, more like it belongs in the story.

I also wasn’t a fan of the MC. For more than one reason. And later on she was pretty horrible towards someone she called friend. And I could probably go on for a few more examples, but you get the idea.

Around halfway point it just go weirder and weirder and I started to not have fun reading the book. My rating went from 3 (it was 4 in the beginning) to a 1. But boy, I wasn’t prepared for how weird it would go. For reals. As the ending and all that was building up came to be, HOLY CRAP. I can tell you honestly that I had an headache already… and that this book made it worse. WTF was that ending. And it ended even weirder with the last few pages. In the end I am just weirded, grossed, and noped out.

Hilarious enough, I totally forgot about Clarissa being THAT Clarissa and didn’t figure it out until like mid-book when something was mentioned.

There were also a few spelling errors around and some parts could have done with editing (like for instance that subplot forced in).

It could have been so much more. Again, the beginning was great. Lots of creepiness and spooky things happened. It is just a shame of the rest of the things.

2 thoughts on “Review for The Haunting of Hacket House”