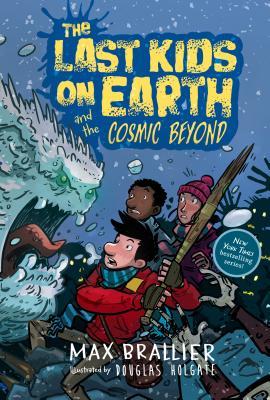 The fourth book in this action-packed, hilarious, fantastic series! This time new villains, friendships get tested, and it is Christmas!

It has been a while since I read the last book in the series. Why? Well, because I got book 1-3 in hardcover and would like to continue the series like that. But I have been checking and keeping an eye out for years and hardcovers are just too expensive. The paperback is HALF of the price. So after getting the Survival Guide during Christmas I decided to just say screw it to hardcovers and continue the series in paperback. Way better for my monthly book-budget.

I have to say that I love the book Jack over the Netflix Jack. Haha, this is probably totally random, but I have tried watching the show recently and well… I don’t know, while he is obnoxious in the books and at times just goes too far (with him thinking this is just a big adventure/game while for his friends this means no more family and no more normalcy), in the Netflix series he is just TOO much and that is why I am happy I still got several books to read. Back to book Jack. In this one he makes some stupid mistakes, says some hilarious things, but I love that he could also rationalise why his friends are not always feeling the adventure. You can see that he is growing up. I love that. His gift to June was so thoughtful and so kind and I was just cheering.

In this book we see the kids trying to make the monsters happy with snow with hilarious results to go with it. Haha, I can definitely understand the monsters though. If I had never seen snow I would also panic in what the hell is happening. I loved that the kids never gave up, they were dedicated to find something to make the monsters happy again. And this all happens while some serious things were happening/going to happen. It may at times feel a bit out of place.. but it also fitted perfectly. Haha, I am confusing, I know. I loved seeing Christmas apocalypse-style and see how the kids tried to make a fun moment for not just them but the monsters as well. Sometimes you need a moment to just enjoy life.

We meet a new antagonist and I just don’t know how I feel about her. I was mostly just frustrated with her for a few reasons. I did like that she was geeky and loved comics and all that comes with that.

There is tons of excitement and even some heartbreaking moments (that one with D. just ripped my heart out) where I was wondering if things would end up right. I know there are still books left, but seriously, at the moment I was just so much in the books that I didn’t think of that. Not to mention.. I have read enough books in which characters die or disappear, so who knows what would be next?

There are battles, monsters, friendship, and more. I just couldn’t stop reading. Each page, each new illustration grabbed me.

My heart broke over that a decision had to be made. They have received a transmission from New York… but will they all go? Throughout the book we see that decisions need to be made and I was definitely holding my heart over what decision that would be! I was hoping this wouldn’t mean the end of our group. Now that I know the decisions, and what has been said, I am very curious about the next books and what will happen in those.

All in all, WOW, what a book. What an amazing continuation of a series. I cannot wait to get the next book in the series. We are getting closer to the end and I wonder how the author will end it. I would highly recommend this book to all!