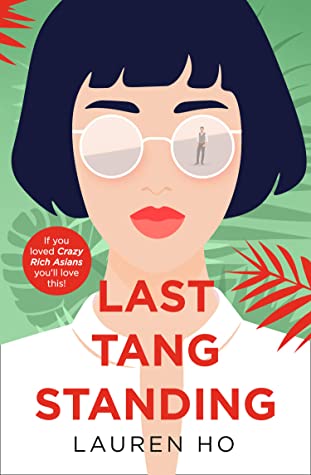 Meet Andrea Tang, a 30-something woman who has a good job, but seems to miss something in life. This was a fun story and I really enjoyed it!

Slow start (1-2 stars), and I even considered just dropping the book at times, but as soon as the second part started my rating went up and up. Until I hit 5 stars! It was definitely a journey, but one I am happy I took and I am delighted that I kept reading despite the very slow start.

It reminded me a lot of Bridget Jones only then set in Asia with an Asian protagonist and love interests. Since I love Asia and I love Bridget Jones I was just very happy. It is a great combo!

There is plenty of romance as well. There is even a love-triangle-ish, but I am not sure if I fully count it. Yes, our MC and S like each other.. but S is engaged/has a pregnant fiance, so is out of bounds, I am not sure if I would count it fully. It was quite simple to see who she would end up with and I was definitely hoping it would happen. That person just fitted perfect with her. And yes, it felt a bit wrong to ship them, but I sometimes just couldn’t resist. I loved reading about Eric, though I wasn’t 100% sure about him, how entitled he acted was just rubbing me wrong, and come on, doing that just mere months/weeks into a relationship is just a no-no from me. But he had his good sides and he seemed to truly care about Andrea. And then there is Suresh, I had such a big laugh about the banter and power moves between Andrea and him. LORD, these two. The vibes between them were just perfect. I have to say I was at first worried that Suresh would become an annoying rival but he turned out to be one of my favourite characters in the book. I loved reading about his webcomics and his actual plans.

I love reading about her job (her rantings and power moves and more), though my heart broke with how much she worked. It just was not even borderline unhealthy, it was beyond unhealthy. No healthy eating, working until the wee hours of the night, not being able to change clothes or go home, nights of working. Nope. But I still admired Andrea that she was doing all she did. I know I would probably have died after a month of doing that job. As soon as we found out what she really wanted to do I was rooting for her to make the chance instead of staying here. Where they clearly didn’t appreciate her fully. Mong was an OK character though I was unsure about him at times.

Next to jobs and romance, we also have cultural, plenty of designer bags, we learn about Singapore, at least a bit, there is friendship. I loved seeing Andrea’s friends and while I was on the fence about Linda at times she still seemed like a good person and I loved that she was there for Andrea and that Andrea was there for her (though I was totally on Andrea’s side during one part of the story).
Then we also have cultural/familial expectations. Her mom is constantly trying to push Andrea to get a husband, make kids, and go go go. Not to mention had remarks about other things. Then there is Andrea’s sister who loves a man who is Muslim. Nearer to the end I was glad to see that she changed a bit more, though… it is sad that she had to go through THAT to have that happen.

The story got better and better and we see Andrea grow immensely in the story. Though I truly hope that she can quit with drinking alcohol, since that was also what grew along with all the stress and decisions Andrea was thinking about.

I had a laugh that she bought mineral water when she was going to Europe because people there drank from taps SHOCK. I live in the Netherlands and I can tell you that our tapwater is supersafe and good to drink. No weird tastes, just water. And that is how it is in many other countries as well. I found it just weird that a lawyer who travels apparently quite a bit doesn’t know that.

The ending was just great! I really liked it though I would have loved to see an epilogue.

I could probably talk more about this story, but this review already turned out longer than I expected, so I will just say that I would recommend this book to all in need for something fun and well-written. You may have to push a bit to get through the first part, but believe me it gets better after that!

4 thoughts on “Review for The Last Tang Standing”