Welcome all to the Blog Tour for What Big Teeth by Rose Szabo! I am so so hyped I can be part of the tour and that my tour stop is on my birthday does a happy dance. The book sounds utterly amazing and that cover is just perfection. I definitely want to read it!

For today’s post I got an excerpt from the book, an INT giveaway (you can win the book), and book/author information!

Let’s get this tour started~ Go! 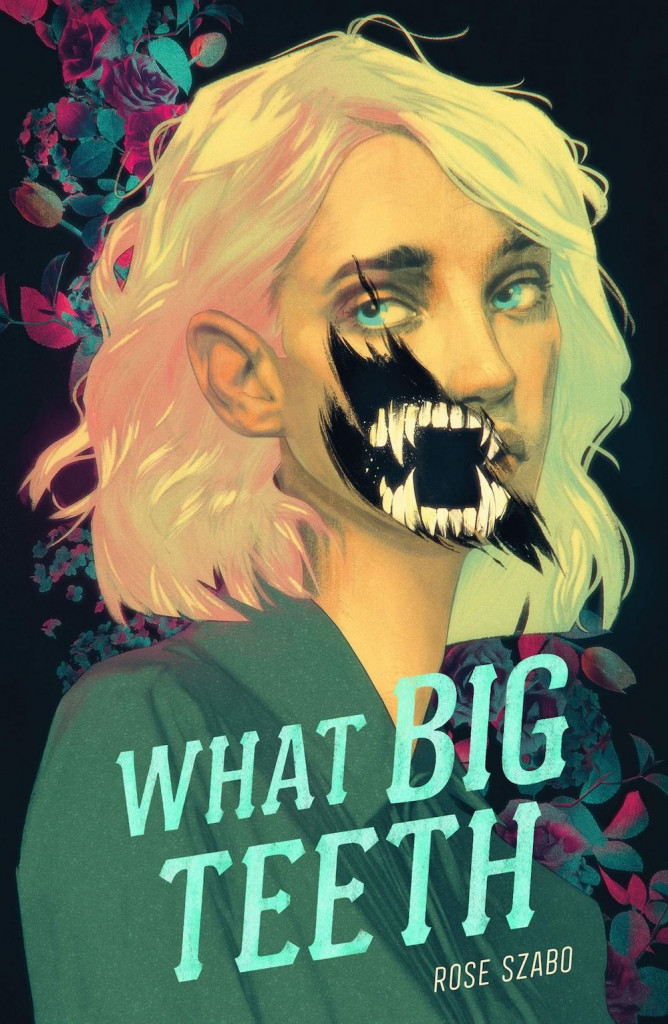 Rose Szabo’s thrilling debut What Big Teeth is a dark, gothic fantasy YA novel about a teen girl who returns home to her strange, wild family after years of estrangement, perfect for fans of Wilder Girls.
Eleanor Zarrin has been estranged from her wild family for years. When she flees boarding school after a horrifying incident, she goes to the only place she thinks is safe: the home she left behind. But when she gets there, she struggles to fit in with her monstrous relatives, who prowl the woods around the family estate and read fortunes in the guts of birds.
Eleanor finds herself desperately trying to hold the family together. In order to save them all Eleanor must learn to embrace her family of monsters and tame the darkness inside her.
Exquisitely terrifying, beautiful, and strange, this fierce paranormal fantasy will sink its teeth into you and never let go.

Rose Szabo is a nonbinary writer from Richmond, VA, where they live with an assortment of people and animals and teach writing at VCU. They have an MA in English from the University of Maine and an MFA in creative writing from VCU. Their work has been published in See the Elephant and Quaint magazines. What Big Teeth is their first novel.

“When I was young,” Miklos said, “I was not Miklos. I was not Zarrin. I was a boy with no name.”
I glanced around the table. Rhys and Luma had leaned forward, ears pricked, dutifully attentive. Mother had stretched her arm across the table to stroke Father’s hand, Father was watching Arthur, and Arthur was watching me. I wondered what each of them saw, or thought they saw.
“You were an orphan?” I asked.
“No,” Miklos said. “I had a family, a mother and a father and two sisters who were older. They had no names. None of us had names. Because none of us had any words.
“We lived like this.”
He shifted in his chair, raised both hands, and began to pantomime like a silent movie star. His gestures created invisible objects: A wooden bowl worn smooth by generations of hands. A pitchfork that he used to stab at mounds of hay. A soft hat that his mother sewed for him and placed on his head.
I watched, transfixed.
Grandpa Miklos made a gesture that seemed to embody transition, the passage of time. “And so when I walked across the land—”
“Europe,” said Grandma Persephone.
“—Europe, to the water, and got in the boat, that was almost the first time I heard people talking. I knew maybe people talked, but only the nobles, royalty. And on the boat, everyone was talking all the time. Such a waste! I loved it.”
“But why did you leave the old country?” I asked.
The focus of the table shifted to me. Grandma Persephone raised an eyebrow. I stared her down. What did she want from me? How was I supposed to let my eyes adjust if I wasn’t allowed to see anything at all?
Grandpa Miklos looked a little proud. “Ah, trying to get me to tell, I see. Clever,” he said. “Not today.”
“The boat,” Grandma Persephone prompted.
“But the boat! I loved the boat. The men there, they taught me so many words. The ones who taught me good words, like hello, and share, and blanket, they lived and came to America, and the ones I could find later when I was rich, I made them rich. But the ones who taught me bad words . . .” He shrugged, and in the candle flicker, he let his face slip shape. One moment he was Grandpa Miklos. The next he was just a snarling mouthful of teeth.
It was over in an instant. I didn’t have time to faint, so I just clung to the table for dear life while my heart thundered in my chest.
“Miklos!” Grandma Persephone said. “She’s not ready for those kinds of theatrics.”
“She used to love it,” Grandpa Miklos said. “Grandpa, Grandpa, show me the wolf—”
“I’m fine,” I said. He nodded at me approvingly. He could like me. He would like me. I’d make sure of it.
“And then I came to New York,” he said. “And it was so busy! I didn’t know there was more than one language; they taught me Polish on the boat, I think. And here, Spanish and Greek and Italian and English. I tried to get food, but I had no money. I tried to go in a house to sleep, but they chased me out. I fell asleep in a—a hole between houses.”
“An alley,” Grandma Persephone supplied.
“With trash cans and dead birds. And then when I woke up it was dark, and a drunk man was pissing near me!”
My face flushed hot. This was not a good story.
“And I was hungry,” Miklos said. “And, well . . .” He bared his teeth and clacked them together. “And then I saw he had these fine clothes, so I put them on. And then I felt something in the pocket.”
He reached into the pocket of his own vest and pulled out a cheap gold-plated watch on a chain much finer than the watch itself. He flipped it open and showed me the inside of the lid. It was stamped with the name miklos zarrin.
For a moment I thought, absurdly, This creature has eaten my grandfather.