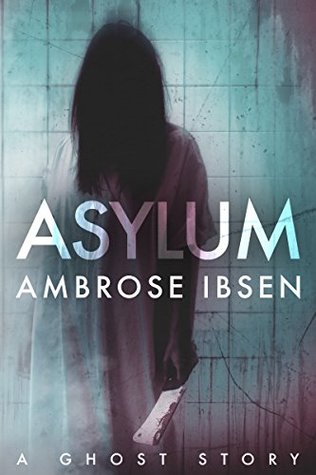 “”The dead,” she replied, her voice a breathy whisper. “If you sit and listen sometimes, you can hear the voices of the dead. They rise up from all around us, from cracks in the earth. That’s how the dead tell you their secrets.”

I wasn’t planning on writing a long review for this one… but after finishing it I just got many feelings and I do want to tell about them.

In this one we meet a newly started professor who gets roped into participating in a student club… one about ghosts and investigations in the beyond. I really loved that, that students made a club like that and that it was approved (at least I am guessing it is). I was curious to see what kind of things they would visit. Well… as you can see from the title, we knew it was going to be an asylum. I have to say that while I was liking the story, it took just way too damn long before we get to the asylum. Really, it wasn’t until 56% before we get to it. WAY TO DAMN LONG.

Elizabeth was the most horrendous character I have seen in a while. And I read a lot. Dang this girl was just horrible. She didn’t give a rats ass about anyone’s feelings. Kept stalking our professor and getting angry when he was doing something else with his life (oh no, heaven forbid that someone cares about something else or has a freaking life). I get that she is curious about the afterlife after what we learn has happened to her, but really? I was actually hoping a ghost would eat her. Later in the asylum bad things happen because this girl just wants to go her own way and fuck the rest of the people in her party. Her boyfriend is clearly uncomfortable about things but she doesn’t give a damn about that which just screams bad relationship to me. I could probably go on about this character, but frankly I am just tired of her. Yes, I am thinking of reading the next books, but only because I am curious about the thing from the asylum.

While I didn’t mind Stephen a whole lot… I did get tired of reading about his constant drinking (either coffee or alcohol), smoking, how he couldn’t really care for himself despite his age. I mean after the I don’t know how many night of alcohol I just was rolling my eyes. I am normally not that judging on people, but he kept talking how he had different jobs to be able to pay for his rent and such. Maybe he should cut back on alcohol and cigarettes? Make his own meals? 😛 At least to a more normal volume.

So yeah, I wasn’t always happy with the story. But, the asylum definitely made me rate this one higher than I thought I would. My initial rating around 40% would be 2-ish stars. But with the asylum happening… I rated it up to a 3 stars. Because that asylum, HOLY CRAP, that was just scary as hell. It was OK at some points (when Terrence was around)… but then there were other parts (the basement) that just had me curling under the covers and being afraid of everything in the dark. It was just so scary and well written. The chase, holy NOPE.

The ending was nice and ominous.

All in all, despite not so great characters, despite it taking WAY TOO DAMN LONG for us to get anywhere, I still loved parts of this. I am a bit sad as I have been reading quite a few Ambrose Ibsen books and so far I liked/loved them.. this is the first that is on the fence.