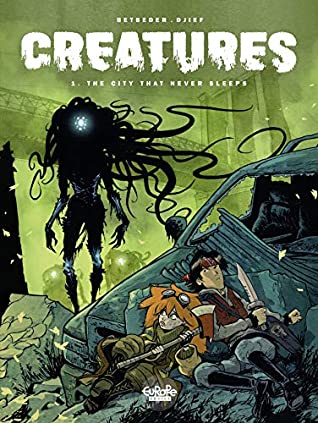 sighsAnd I thought American GN/Comics were bad in not showing anything and just dumping you right into a story… this one does the same thing. For most of the book I just had no clue what was going on. What happened in this city? Why are the adults this but not all of them? Why are some of them slobbering messes? What is that tentacle thing and why is it so invested in Peanut and Vanilla? What is Peanut? How did he get his powers? Why do most of these kids suck? Where are the other kids? Given that adults get it there should be many more kids around, right? What is the mist? I could probably go on for a while on my questions. This book seriously felt like a 2nd or even 4th book in a series. I definitely hate it when we are just dumped into a world without any bit of backstory. Because really? At this point I don’t even want to go into the next book. Seriously, there is something wrong if the blurb is MORE detailed than your book. WTF?

In this book we follow two groups. Vanilla and her brother Peanut as they try to make it by each day along with their drugged up mom (for safety because we later clearly see what happens when adults go conscious, aka not a good idea). We see how Vanilla tries to keep her family alive, safe, and happy. Though Peanut, who btw I loved that he was an albino which we very rarely see in books, was just ungrateful and annoying. I guess he misses his mom, but seriously, he did some shitty things that brought everyone in grave danger. 😐 I loved Vanilla though, loved how kick-ass she was, and how she did everything for her family.
Next up is another group featuring 4 teens/kids. Not sure about their names, I wasn’t a fan of any of them. Two of them didn’t care that Vanilla was also surviving and just went and robbed her and broke into her home. Two others (brothers) were also obnoxious and I hated what they did to Vanilla in the end. Wow, I get that you are all hungry, but that is just a shitty move. No fucking thank you.

While it was quite exciting at times (creepy Cthulhu monster, zombies, and more) , and while I loved the art (character designs are great, especially Vanilla is awesome), it was just all the confusing, again, it felt like a much later book in a series. Which is a shame. If we had just a bit more backstory I would have loved this way more.