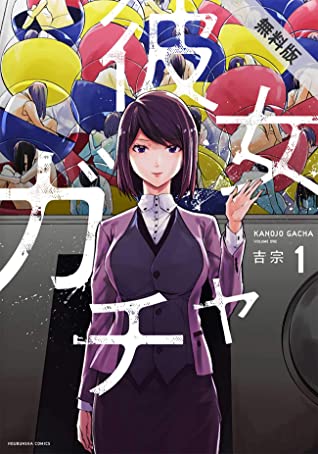 It is Gacha time~ This time no figurines or toys… no this time it is girls!

I was intrigued by the premise of this book. Girl Gacha? Is that even legal? Well, apparently these girls all signed up for it. These girls want to be gacha. For many reasons (bad break-ups, injuries, and other things), though I hope we get a clearer image in the gacha process later on as I got so many questions. I mean, we do get a little glimpse under the veil with the last girl, but it just wasn’t enough to satisfy my questions.

I am a bit on the fence about this manga… because of the guys. The first guy looked like a normal otaku who just wants a girl. But then when he gets a gacha girl he constantly wants sex with her while she is clearly not OK with it. Then when another girl he met a speed-dating event (before he got gacha girl) asks for a date he just goes for it. WTF? Dude? You finally got a girl of your dreams, and you do all this? BAH. That story ended in a way that was NOPE.
Then came the next guy and once again I thought this would be a nice story about a shy guy finding a girl of his dreams… once again NOPE. WTF happened next just has me reeling back again. He was just horrible, not just towards her but also towards others. The ending was just all mixed up. The only guy I liked was the business dude at the end. Though I wasn’t a fan of the girl, at least at first. Haha, funny how that one reversed.

As I said in the beginning, curious about the gacha as it seems that quite often it just ends up in regret, hurt, and pain. Then again, that isn’t something new. Generally when wishes are involved or things that can bring something special to your life it is tricky business. I wonder if there are more happy endings coming between Gacha Girls and the guys, or that this will be a very depressing manga. In which case I will probably save it for another day.

The art in this one was pretty good, the sex scenes (yes there are several) were well drawn.