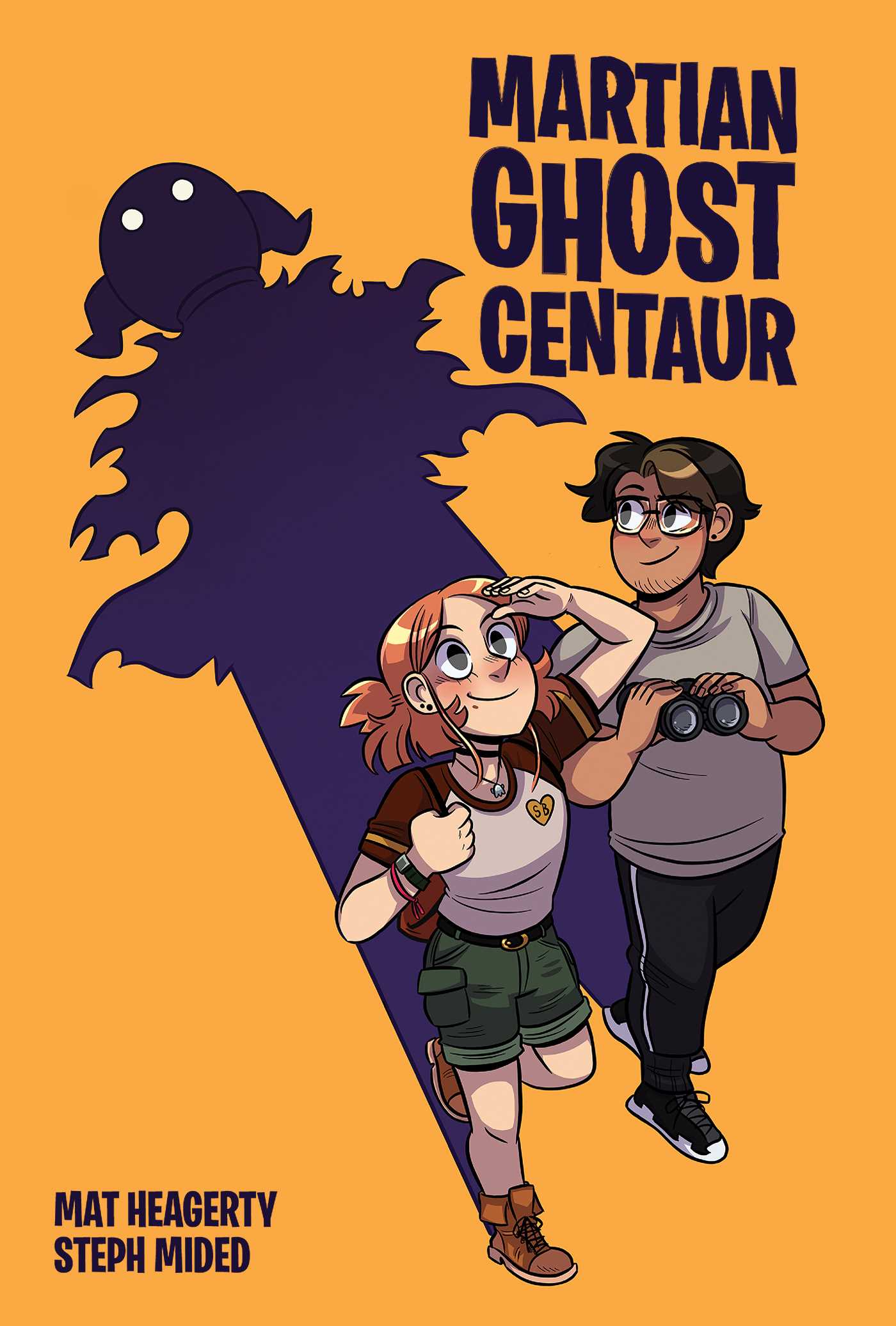 A small town, a Sasquatch, a girl determined to do everything she can to save the town, and more. I really had tons of fun reading this one.

Meet Louie, a strong girl who loves her two dads and who loves her little town. I loved how Louie was determined to help her dads, her town. She never once gives up, instead just boulders on making new plans for getting money (she is already letting people sleep in her closet as an airBNB which had me laughing so much), and making sure her town is getting saved. I would have liked her to be a bit honest towards her dads in several of the pages, but given what we find out about the dads.. I can imagine that she isn’t going to let that slide. Still, did she really think no one would notice? 😛
I loved her plans to revive the town which, as the title already tells you WAY before it actually happens in the story, means the Martian Ghost Centaur makes its appearance. I loved that plan and I loved seeing who was involved in it and how they made it a success.
I loved seeing her try to get people away from the town (the techies) by putting signs everywhere, and doing other sneaky things to put them off from getting things.
Plus, we see her grow up and ask herself some questions. I like that this was added and I loved seeing Louie make some decisions and find answers.

I love her friendship with Felix, they make quite a pair, though I would have liked her to be a bit more OK with his plans. I get that it is no fun to have a friend move away, but not everyone wants to stay in town forever. Some people just have other dreams.

The dads were so cute together!

My heart broke for this small town and how hard it was for everyone to stay. How much money problems there were and how everyone was just giving up. 🙁 My heart broke further when Louie’s dads also confirmed their issues and were thinking of moving. Poor dads, poor Louie, and poor little town which looks so awesome (I definitely want to visit that bunker grocery store).

The Sasquatch stuff? I really liked that story, though my heart just broke when we found out certain things. 🙁

I at first wasn’t too big of a fan of the Youtube star, but later on I started liking her more and more and I could see that she is a sweet girl.

The ending had me smiling so so much. I am so happy with it!

The art was fabulous as well, I like the style a lot!

I know that Leef is the villain and we are supposed to dislike him, but I so wasn’t a fan of him that I didn’t like the story as much as I could have. I was just frustrated that this crap was allowed. That he just could buy up left and right without anyone caring or coming between. It just seemed utter bullshit. The dude is just pure evil and doesn’t have any sympathy or care for people and their lives/emotions. He just treats people like pawns. Bah. Disgusting human being.

All in all, a fun book featuring mostly great characters and a sweet town that needs to be saved. I would recommend it.