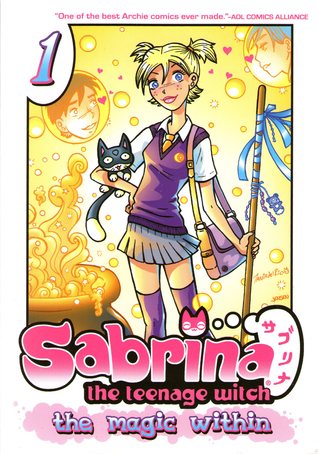 A fun and magical graphic novel featuring Sabrina! The good Sabrina that is!

Yes, I have little good to say of the Netflix show, I tried a few episodes but it just wasn’t my Sabrina. My Sabrina is the bubbly blonde haired girl who tries to get through puberty and life while also being magical, she has tons of fun and hilarious adventures with lots of romance. Much like in this book. This book definitely reminded me of the fun TV-show (this one: https://en.wikipedia.org/wiki/Sabrina_the_Teenage_Witch_(1996_TV_series)) that I so loved.

Though I have to say that I am glad I know the TV-show, know Sabrina, because this comic/graphic novel has the same problem as many American comic/GN, you have to known the characters to get the story because you are dumped in the middle of it. At least that is how it felt. I just couldn’t get used to Shinji because of this as I just didn’t know him. He just came out of nowhere.

On that note, I don’t love love triangles. Those who know me know I hate IT even. And that was the same in here. Sabrina likes Shinji and Harvey and they, well at least Shinji is quite clear in his intentions, like her. Throughout the book we see her wonder who to date and who to like. I can tell you honestly that I wasn’t a fan of either of the boys. Harvey needs some balls because boy he is just so confusing. On the one hand he wants Sabrina, on the other hand he acts like a dick. Like with the ribbon? He could have made it romantic but he made it seem like they were just friends. Later on he seems to get better… only to revert back again. ARGH. Shinji just needs to stop thinking he is better than anyone, especially mortals. I hated what he did during the concert. Bah.
Plus, I did think it was kind of rude to both boys that she just couldn’t pick. I am so glad with one of the stories of the book as that addressed this one. I hope Sabrina has learned from it.

The council.. well they are just as touchy and weird and over the top as in the TV-show. I still think it is weird how hard they focused on Sabrina. Probably because of her aunt, but come on. She is a teen. Teens make mistakes.

Sabrina was just so fun and so bubbly. She is a bit more bubbly and a bit less responsible than in the show, but I still love the girl. I love seeing what she is wearing each day. I think it is admirable that she is doing two schools, magic and mortal. Then again, she probably has no choice given her aunts. Haha. This is definitely one of my favourite renditions of Sabrina.

Salem, he went from looking like a stiff fake cat in the TV-Show to a plushie that is alive. Haha, that is great, though I also feel sorry for him. I mean, getting changed into a cat is one thing, but a plushie? OH man, that is even worse. I guess he can commiserate along with Ioryogi from Kobato. 😛

The aunties were fabulous! I liked them just as much as I did in the Tv-show!

The stories (we get 10 issues in this one) are all very nicely written and I enjoyed them greatly. We see Halloween parties, evil witches, spells gone wrong, school time, and much more. While there was some darker (with the evil sorceress) and more serious (like with the Harvey/Shinji in the car or the Winter Dance) and some eye-rolling (with Harvey/Shinji drama) moments most of the GN is all cute and bubbly and I loved it.

The art… while not always the best (I mean what is up with their bodies and faces?) was still a style that fit well with the cute/bubbly style of the stories/this book. I have to say when I got used to it I started to like it.

All in all, I really enjoyed this one! It brought me back some very fun and nostalgic feelings on the Tv-show that I so loved and I definitely want to continue reading this series! Recommended to all who, like me, prefer cute and bubbly Sabrina over depressing/demon-loving Sabrina.