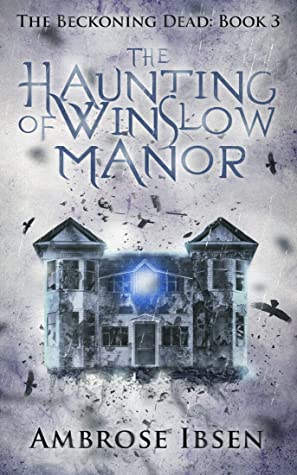 The third book in the series, this time we are going to Sadie’s mom house: WInslow Manor. Sadly, this wasn’t the best book.

I was totally into this series so I kept reading them on and on. While this review will be posted on the 9th, that is only because my blog is quite full with scheduled posts again. I actually finished the book on the 1st (and the other 2 books a few days before that).

However, this book just was a disappointment. So much talking and yappering, and while I know it is important because we need to know what is going on, we need to get all the details on Sadie’s mom… and what she really is. But come on, it wasn’t scary for most of the book. It started off well, then had maybe a few scares here and there but very few, and then it takes our duo up to 60%+ to finally go to the home. There it was on and off scary. I just had expected, given what lurks there, that it would be 100% frightening, but eh.

I am glad that we got information, but it was just a bit too much, would have been better if it had been spread more over the other two volumes. Less info-dump and more organically/natural. But we learn what mom is, how mom and dad met, and what happened afterwards. Which made me a) happy but also b) WTF? This plot is just weird now.

Plus, I had expected this book to be the end. Maybe it is? But I am just very confused. It would be awesome if this was the end, but I have a feeling there may be more coming given the ending. It is a shame as it would have been cool to end it here. It begins with Beacon House, the one in which Sadie gets her powers back (if they ever truly left), then we go to the asylum for more information, and then it all ends at Sinistrari and Sadie’s mom’s house. Instead it doesn’t really end. Maybe Sadie goes to Italy? Haha.

While I get that Sadie didn’t want to open the damned box, I just got pissed at how long it took her to open the box. Yes, it is scary, but really, it was just frustrating as I wanted to know what was in the box and I just found it weird she would chicken out.

The ending was good up until the last few sentences, then I wanted to do the things people do in these GIFs.

All in all, I am just not sure what to think of this book. I will give it 4 stars because there were still things I loved, I flew through the book. But I sadly just can’t give it 5 stars like the other 2 books. It just missed something.. and I thought it would be over after this one.