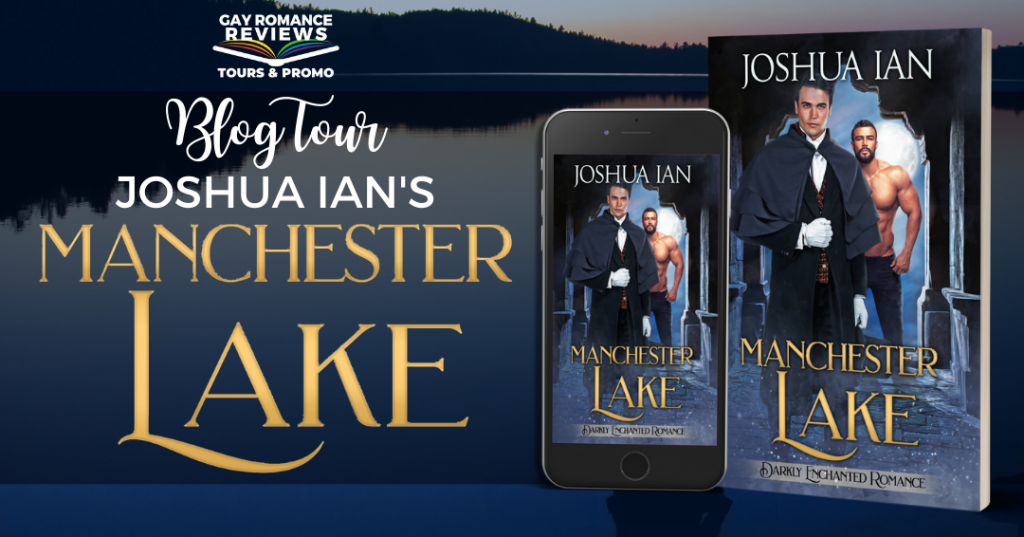 A magical welcome to Manchester Lake (Darkly Enchanted Romance #3) by Joshua Ian. I just couldn’t resist signing up for this book, it sounded so sexy and fun!

For today’s post I got A LOT. I got an excerpt, information on the book/author, some teasers, and a giveaway! 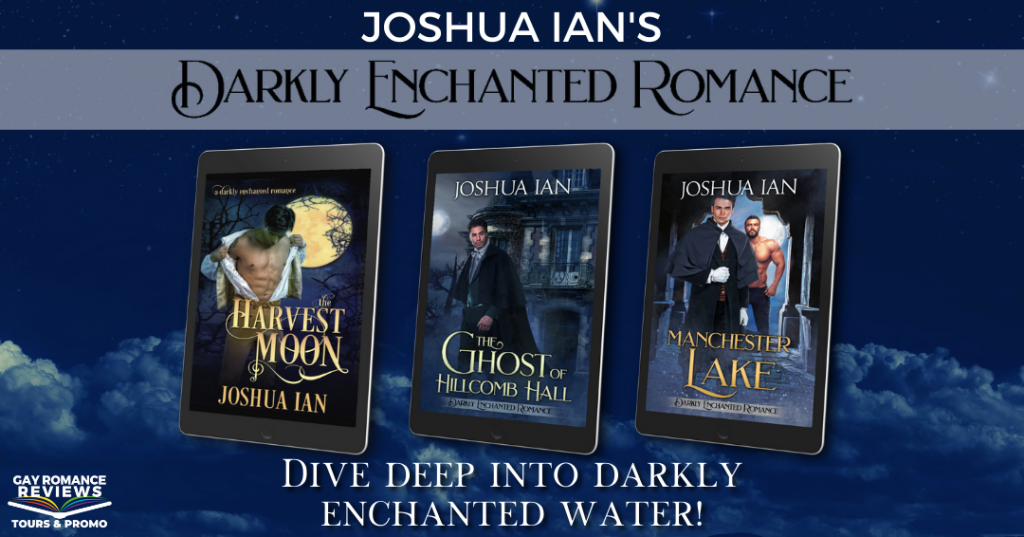 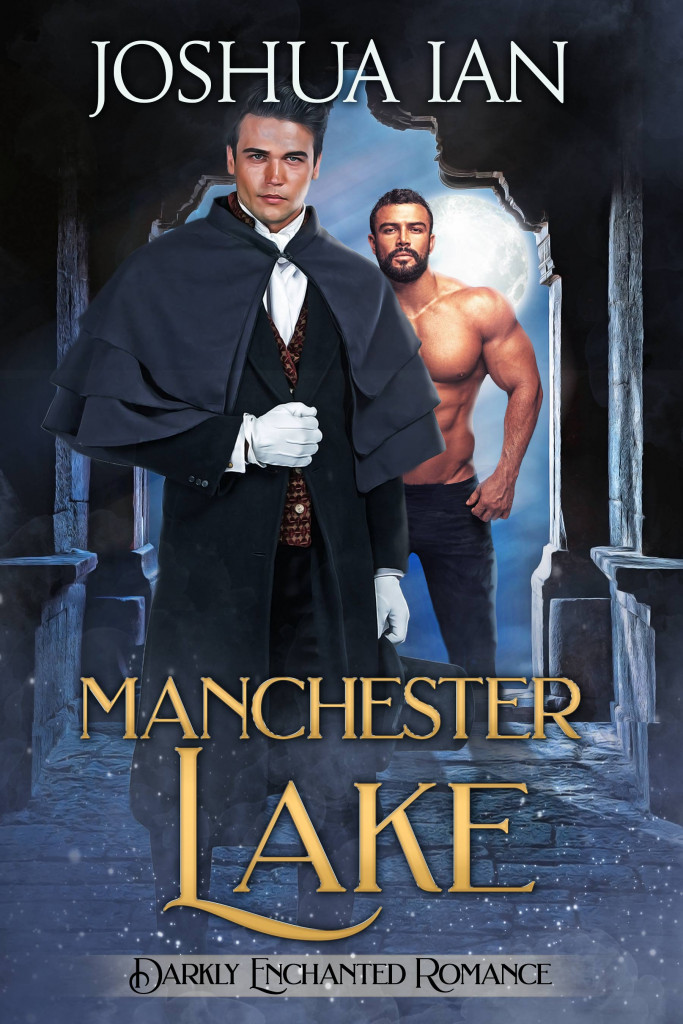 England, 1910
Monty, along with his best friend Bishop, investigates an odd seal-like creature swimming in Manchester Lake. The pair soon realize they’ve found a selkie when the magnificent animal transforms into the most gorgeous man either of them has ever seen. Determined to discover the origins of the mystical man, they bundle him into Bishop’s brand-new electric automobile and whisk him off to London.
There they find a host of distractions: a tastefully debauched house party hosted by silver-tongued aristocrats, and a queerly European-inspired novelty called the night club. Both are filled with a cast of characters sometimes amusing and sometimes frightening. And as the night unfolds, Monty comes face-to-face with ghoulish agents of the occult as well as revelations from the past.
Most surprisingly of all, Monty finds himself falling for the beautiful creature from the lake, who seems equally interested in him. Can he really find himself in love with a man he has only just met? Or do they have a deeper connection which goes much further back? And what does it all have to do with the memories of his trip to Paris three years prior?
The mystery of the selkie from Manchester Lake is only the beginning, and before their adventure is finished Monty will see the culmination of long suppressed secrets explode in a firestorm of magic and passion! 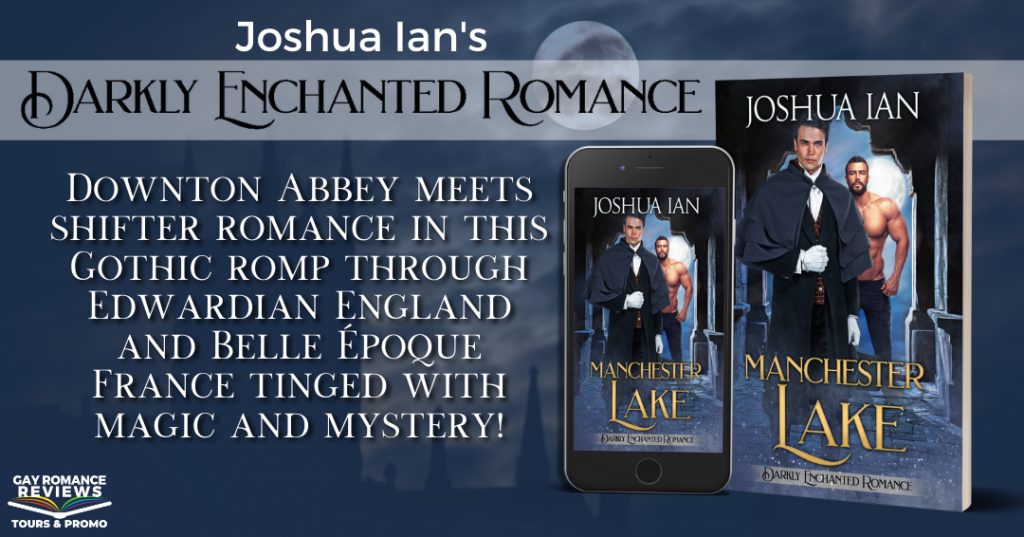 Joshua Ian can easily be captured by a witty turn of phrase or a low-bottomed electronic bassline. If you manage to combine the two, then you have his heart forever. He lives in New York City and writes mostly historical, speculative, and sci-fi/fantasy fiction but he does love a good mystery. He watches too many movies, eats too much dark chocolate, and falls into way too many Wikipedia rabbit holes- but it’s all in the name of research (or so he tells himself). One day he plans to travel the world – to see what each country has to offer in the way of movie theatres and dark chocolate, naturally.

“And your friend won’t mind?” asked Trevor.
“My friend?”
“The ginger-haired one, who is so passionately devoted to race cars. You arrived together so I assume you were meant to be spending the day together.”
“You don’t miss much, do you?” asked Monty, blushing a bit. “Bishop won’t mind. Unless you suddenly sprang wheels for feet and began to trundle all over, he wouldn’t notice my absence, I assure you.”
“Then I shall endeavor to retain my ankles.”
As they walked towards the river, a breeze came up and Monty’s sketchbook fluttered open. Trevor clamped onto it so as not to drop it and gazed on the now open pages before closing it.
“Whoever your model was for these drawings, he certainly had an impressive form.”
“There was no model. It’s simply something I imagined.”
“Indeed. Well, you have quite the healthy imagination. That one just under my thumb, he looks as if his legs are merging together. Like a mermaid or some sort of mer-person, I imagine.”
“When I was a small child, do you know, my favorite book was Andersen’s Fairy Tales and I always made my amah read me the story about the mermaid?”
“And now you’ve graduated to Salome.”
“I think The Little Mermaid is still much more my style.”
“Perhaps I ought not to have taken you to the river. You aren’t suddenly going to sprout gills and swim away from me, are you?”
Monty smiled at him. “We’ll just have to see, I suppose. Come, let’s have a swim.”
“A swim? We can’t bathe in the river,” Trevor protested.
“Why not?”
“For one thing, I’m sure it’s illegal somehow. And, too, there.” He pointed across the river. “There’s a whole village of factories just there. What if someone sees us?”
“It’s France,” Monty said. “They don’t mind such things.”
“Don’t they?”
“Besides, you’re a very handsome man. If they see anything at all, I’m sure it will be a delightful sight.”
Trevor smiled and Monty saw the blush on his cheeks.
“I certainly don’t compare with that man in your sketches.”
“That is solely a man of my creation – a sort of mythical man,” replied Monty as he shucked off his jacket. “While you’re a very real man. So I wouldn’t think there would be need to compare. Besides, why would you need to worry how you compare?”
He tossed down his waistcoat and began to unbutton his shirt.
“If I intend to keep your attention for more than just this one afternoon, I should concern myself with how appealing I am. Shouldn’t I?”
“Likely you should,” agreed Monty.
He tossed his shirt on the pile of clothes developing on the ground and peeled off his undershirt, so that he stood there stripped to the waist. Trevor’s eyes moved over his exposed skin, drinking in every inch. Monty had never had a man look at him like that, slowly, longingly. He felt admired and acclaimed. It made him feel powerful.
He stepped forward and moved in close to Trevor.
“The heat is unbearable. You know you want to.”
Monty began to unbutton his trousers, sliding them down to the ground. It had been too hot for any undergarments that day, so he stood there, nude and ready for the water. Trevor could not control his gaze as he too began to disrobe. Monty smiled at him and then turned and ran towards the river, jumping in with a loud howl and splashing hard into the water. 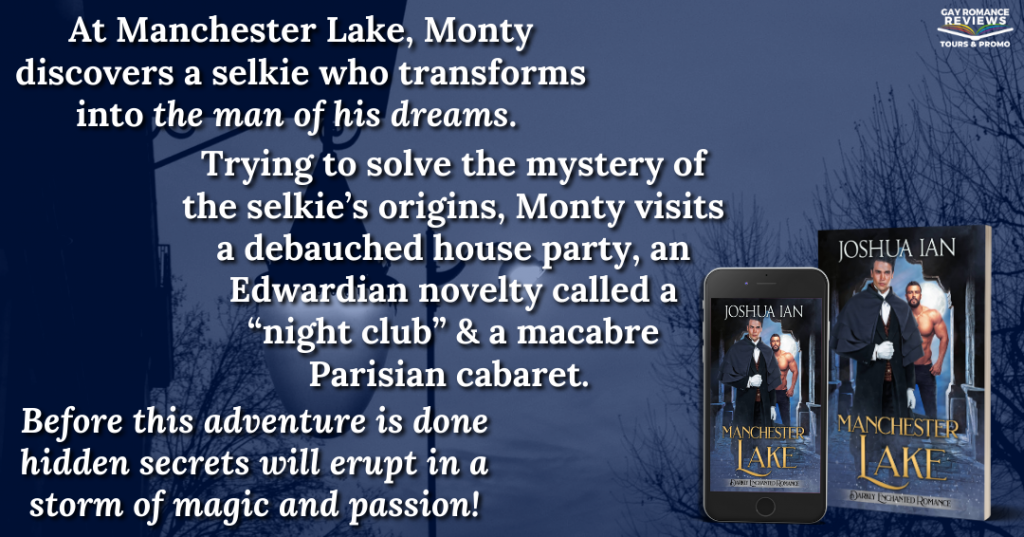