Welcome all to the Blog Tour for Four Weddings and a Swamp Boat Tour by Erin Nicholas! I am pretty hyped to be part of this tour as the book sounds great (and sexy)! Though I do wonder why our MC just didn’t say no the first time (five times seems a lot). Haha. Guess I will be reading the book to find out. Can’t wait!

For today’s tour I got an excerpt + book/author information! 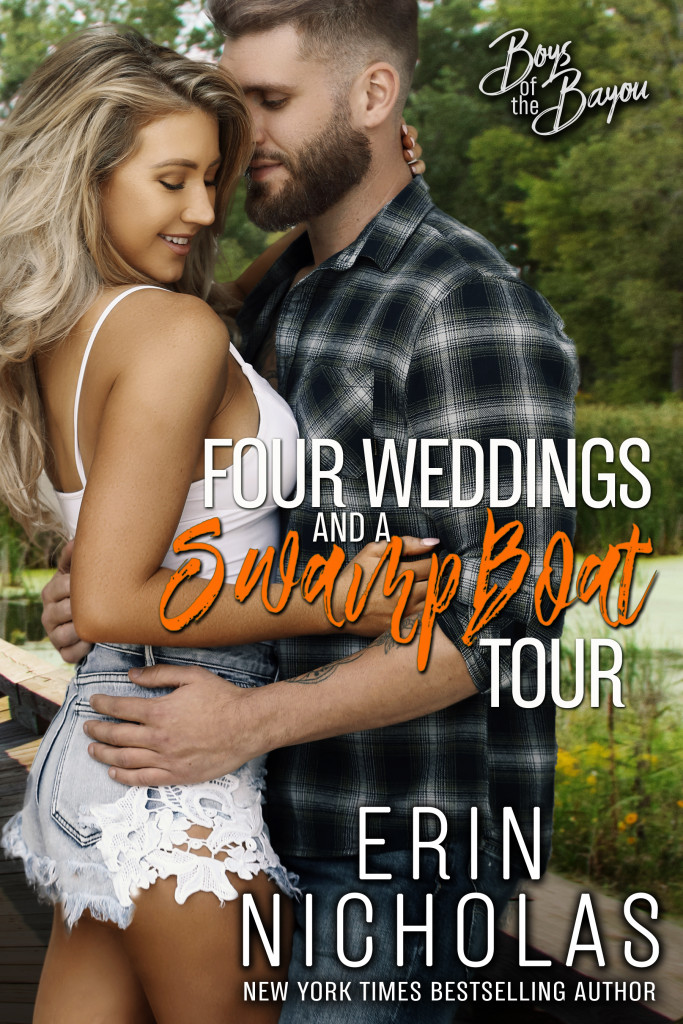 She’s been proposed to five times.
Five.
She even said yes to one of them.
And then broke his heart when she called it off. Not to mention her mother’s heart. And her grandmother’s. And his mother’s. And…you get the picture.
Paige Asher has now officially sworn off all dating. Diamonds give her hives.
All she wants is to be a yoga-doing, cat-collecting, vegetarian in peace. Away from her marriage-crazy family and all their expectations.
So when her weekend fling turns into a real friend and offers her a place to escape, she finds herself on his doorstep in Louisiana. And right in the middle of not just one family wedding, but three. Of course.
Charming, sexy bayou boy Mitch Landry gets stuff done. Whatever anyone needs. From alligator-sitting to getting a buddy drunk to showing a woman a good time to fixing a swamp boat, he’s the man. No problem. No drama.
But he wants a hell of a lot more from Paige than a temporary friends-with-benefits arrangement. He wants to take care of her. And her five cats. He also really wants other men to stop asking her to marry them.
But if a roommate and a few orgasms are all she wants, that’s what he’ll deliver.
He can just be her friend and not commit the greatest sin of all…asking her for forever.
Probably.

“Goodnight, Paige,” he finally said.
“Goodnight, Mitch.”
They still just stood looking at each other.
“You need to go to your room,” he said, his voice a little tight.
“I will. You too.”
“Yeah, but—” He sighed. “You’re right by my door.”
She looked at the closed bedroom door again. And smiled. “I guess I am.”
She didn’t want to torture the guy. He was trying to be noble. Or something. But she wouldn’t deny that she liked that resisting her would be difficult.
“You need to move away from my bedroom door, Paige.” His voice was a little gruffer.
“You’re in my way of getting to my bedroom too,” she pointed out.
“But are you tempted to throw me over your shoulder and say to hell with all of your good intentions? Already? Within twenty minutes of deciding you even have good intentions?”
She laughed even as warmth filled her. Not just heat. Not lusty heat anyway. But a feel-good warmth that she didn’t quite understand. But she liked it. “Kind of.”
He swallowed hard. Then said, “Go to bed, Paige.”
She moved to the right, away from his door. As he came forward, she playfully pressed her back against the far wall.
He smiled, in spite of himself, and went to his bedroom door. He twisted the knob but paused and looked over at her.
She inched her way toward her bedroom, still against the wall. When she got to her door she reached for the knob and shot him a smile. “Goodnight, Mitch.”
“’Night.”
“And I’m just right here if you have any night time needs. Bad dreams.” She paused. “Good dreams.”
“Stop it.”
“Stop what? Just being a good friend.” She grinned.
“My dreams might include white dresses and tuxes,” he warned.
Again, no sense of oh shit. Instead she tipped her head. “You’re pretty good at bringing all of that up without asking the four-word question.”
He didn’t comment on that. “See you in the morning.”
“Okay.” She gave him another smile, then slipped into her room, feeling his eyes still on her until the door shut.
She slumped against it, pressing her hand to her stomach.
Dammit. She really liked him.
It was really too bad they weren’t going to kiss anymore.