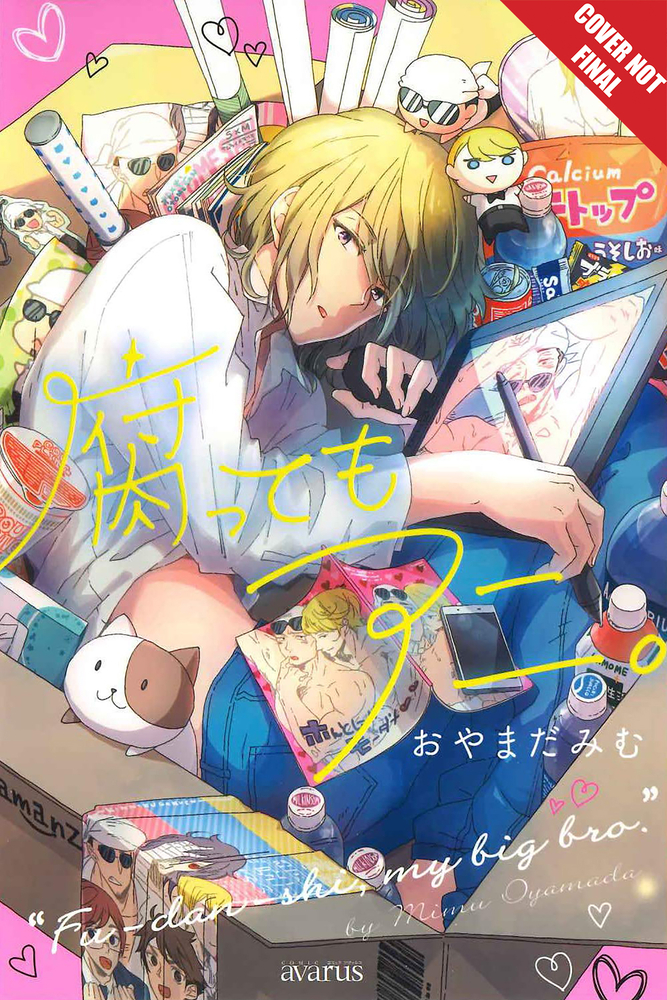 I received this manga from Netgalley/the publisher in exchange of an honest review.

I am so delighted to see manga appear on Netgalley and that I am able to request it! I am happy that I was approved for this one. I love BL, and this title just spoke to me. I needed to know all about this brother. What kind of stuff does he draw? How will his sister get sucked into the BL world? And more! I also loved the cover, the art looked really good.

I am thinking that I should just stop reading manga with shut-ins. Really. No matter which one I have read over the years I have watched anime and read manga… I haven’t found one I liked. Generally I just get annoyed with them as they make other people do their shit for them. In this one the brother is using his sister’s name to buy things because he likes BL (man up), he uses her hands because he has big manly hands (WTF?), he just forces, or well bribes her with food so she helps him because he is just too lazy to get a better time schedule or like an assistant (just no). He should just be honest with his fans, one day it will get out that he is the creator… I get that shut-ins generally have mental health problems and don’t dare to go outside, and at times I could understand the brother, but other times I just wanted to shove him out of the door and get the fucking help he needs. Someone to talk to, someone who helps him. He has been inside for 4 years. Why is no one looking for help? Though I did think it was a bit weird that he went from being afraid to leaving his room to partially going to comiket to going to a cafe in such short time. Plus, I just didn’t feel OK with reading how he kept putting himself down. For no fucking reason he just kept saying he was a maggot that he was worthless and so on. Later on I did get to like him a bit more as he did more of an effort, but it was very hard to read the first couple of chapters.

I did think it was weird that he called his sister Madam Kirika at times….

I did love all the other things though! I love Kirika and how much she cared for her brother. I loved seeing Kirika get immersed or at least try to make sense of all the BL stuff and how conventions work. I was delighted to see that she got to the dark side, um cough the good side. Welcome girl, welcome to BL land! Teehee. I love her reactions to her first Shounen-ai/Yaoi, ah, yes, I remember having the same reaction when I first started with it. I had a laugh when she got deeper and deeper into BL and even was able to discuss/argue with her brother. Oh yes! I did feel sorry for her that she had no time to adjust, her brother just asked her to do all the porny stuff, her expressions and things she said reminded me of Genshiken. Hope that makes sense, in my head it does. Haha. I loved seeing all the events, all the things involving BL, and man I wish I could have gone to all those events as well. I love BL, and I wouldn’t mind some doujin or other things to enjoy. I love the BL scenes that seemed to just happen to the brother. For reals, he has a very BL worthy swoony moment with a buff/old mail man. Later on he also has one with one of the people working at the cafe. I just had such a laugh about that. I liked the 4komas (especially the one from chapter 6, yes, you can like the same pair… but who is top or bottom is a whole different sect). The art was also fantastic and I really enjoyed the expressions on the faces of the characters, I love the BL scenes (with all the glitter that you always get in manga during those scenes). The ending was just terrific and I am so so rooting for Kirika!

All in all, despite the brother and me not liking him that much… I really enjoyed this manga and I am delighted I got the chance to try it out. I am kind of hoping there is more coming out and that this isn’t the only volume. I want to see how Kirika gets better, and there are other things I would like to see.