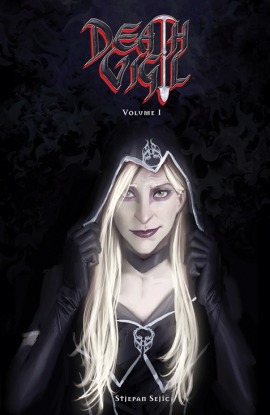 A super-exciting and fun to read graphic novel/comics about a group of people (Vigil) who are in war with Necromancers.

There is plenty of action but also lots of humour to lighten the mood (like Sam commenting on the fact that everyone is taking their shirts off when they are near him). So I laughed, but also rooted for the characters. I am glad that there was so much humour, because I think if this book was all seriousness I would have liked it less. It also made the characters, especially Bernie a bit more human and less a few thousands year old lady who seems very distant at times.

I wasn’t a fan of the necromancers, though most of them were just manipulated idiots. And really, I was pissed at the reasons why that woman was so gung-ho on getting the scythe. Really? You could have just thought a bit more but, noooooo. You only cared about one thing, and look where that brought you?

I was definitely shipping Sam and Bernie together, they make quite a couple and was hoping that Bernie would go for it. Yes, she is a few thousands of years old and Sam isn’t as old as that, but they were so cute together. I loved how they were always there for each other no matter the situation.

For a long time I thought that our Vigil was the only one around, but we find out that there are other Vigils as well and now I want to go to them.

I loved our girl, Clara. I loved seeing her get used to life as a dead girl, I loved her “weapon” and seeing her figure out what it was (her memory is a bit fuzzy) and see her use it to the full potential. She was such a great character and while I feel sad she died due to a dick boyfriend, I guess it is also good she did because she finally found a family, people who care about her and who love her. Haha, I do hope this doesn’t sound too terrible.

The battle near the end WOW WOW WOW. That was just one rollercoaster of awesomeness and I was already stuck in the book… well now I was even more. There is a ton of things happening, monsters popping up, monsters being eaten, battle plans brought to action, and so much more. And just when you thought things were over, haha, BOOM, betrayal and more battle. Holy crap!

The art, fantastic! Love it! Then again, Stjepan Šejić is one of my favourite artists. Sunstone was just as gorgeous as this one. I love how the artist is able to show emotions and does a great job with facial expressions.s

All in all, I now need the second volume. I need more!