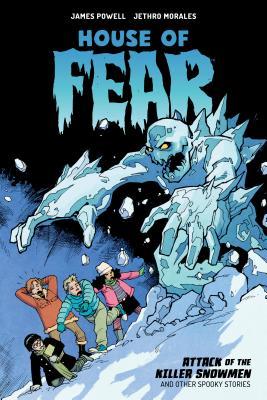 I came across this book and just had to get it because well, I am definitely in the mood for creepy things. And this one seemed to be right up my alley. And it was. I do have to say it wasn’t as scary as I had hoped, but I still had fun reading and there were a few moments that were scary.

I liked that we had a narrator/storyteller in between the stories. At the beginning he would give us an intro and at the end a spooky warning or final message. The guy is properly spooky. I really love it when shows or books have an announcer/narrator/storyteller. It just gives that extra OOMPF to the story.

In this book we get 5 stories, 4 longer ones and one very short one. Out of the 5 stories I have to say that Teeth was the scariest and the least scary one was Attack of the Killer Snowmen. Teeth was just so creepy and scary, imagine waking up and something is eating teeth and just is able to make you lose your teeth, yelp, nope. The ending of that one was hair-raising and made me love it even more. The least scary was about snowmen coming to life, but it just was a bit too childish and never felt scary because the kids knew quite soon how to solve things which made it a bit too easy.
While The Leaving was very short, it was very effective so that one definitely gets second place. The other stories (one about a crazy axe man and another about a monster in a lake) were also written well and I enjoyed reading them. Not too scary, but still good to read.

The art style however, I did like the first 4 stories and their art, though I had to get used to the style, but the last story’s art was just not my cup of tea. For some reason that one is done by someone totally different, I don’t know why.

All in all, if you are in for something spooky but not too scary, I would recommend this one. It was fun to read and I flew through it.