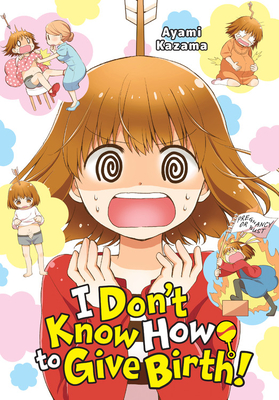 A pretty hilarious, but at times a bit sad, manga about a girl getting pregnant.

I have been eager to read this manga for ages and finally I had time to do so! I just love the cover and the blurb made it seem like this would be a fun/funny autobiographical comic to read!

I was shocked that she didn’t know how sex and the like worked until she was quite a bit older. HOW? Do Japanese not give biology lessons and the like? is so confused

My heart broke that things weren’t so easy for her. She wanted to have kids so badly… but finds out that she cannot get them that easily. I was rooting for her and hoping that all that sex and the help of doctors would help her get a kid. I had a laugh though at the doctor and how open and frank he was. I could definitely relate to how awkward and stunned she felt. I would have definitely acted the same way, haha.

I liked reading about what the fertility treatment entailed. I know quite a bit about it already as I read some other books/seen some shows that feature it. But it was interesting to see it explained in manga form. I am glad that there are more manga about real situations, real life.

Despite being about a serious thing, there was tons of humour and hilarity as she asked her hubby for all sorts of things (like when he was crunching hard on his manga and she asked for his sperm). I loved that this book contained so much humour. It is a serious thing of course, but some humour lightens the mood.

It was really interested to read and I just loved how much support she got from her husband and how go go go he was with everything. It was quite cute!

We also see that, in the beginning at least, she struggles with things because it is mostly her husband who wants kids while she is OK with just being with him alone. I am glad that she thought about things later on because really, it is great that your husband wants the kid, but if it is this much pain and hurt to get one you need to be aboard as well, and not just tag along and do all the work.

I did think it was weird or odd that she said: “That’s right. You naturally start thinking about kids once you’re married.” Sorry, but no. My hubby and I talked about that and other things quite early in the relationship. I don’t want kids of my own (for good reasons), and I need to know if someone minds that or not. I am not going to wait until marriage before discussing that (and given we didn’t get married until we were together for 10 years… oh boy, imagine how weird that could have been). Even if I wanted kids I would want to see what my lover thinks about that. Really, that is kind of important to discuss beforehand. Just like other things. You don’t want to be stuck in a marriage only to realise there are issues or things that you partner thinks should be different.

I was just squeeing in delight and clapping my hands when she was finally pregnant. I was so happy for her! And with that begins the whole how does pregnancy work, how does childbirth work, what is this feeling in my stomach? I laughed hard when she called her baby Blasto-chan (after the eggs who in that stage are called blastocysts). We see her try to find underwear (apparently a daunting quest) and later also underwear for the baby, we see her battle morning sickness, burn scones, think of a birth plan, classes, boobs, and tons more. It was all very fun and interesting to read, especially since her reactions to things were just perfection and I had quite a few giggles (though at other times I just wanted to give her a big hug). During the labor I wondered why no one had told her how to do things? They just said push and they should have seen by the looks of our MC that she was confused about things. And did they thump her belly or did I see that wrong? WTF?

I loved seeing the first time with the baby and how she and her husband tried to figure out how things worked. From breastfeeding to bottles to sleeping.

I like that next to the manga we also get bonus parts in between in which either the husband or our MC talk about certain things and they give tips and tricks. I really liked that those were added. The manga made it seem very one way, and this gives a bit extra dimension to it all.

I really enjoyed reading this manga and I am happy I finally had the chance to read it! It was interesting and funny and you will definitely root for the MC and her husband. There were a few things that were odd as I talked about in the review, but I am guessing that is cultural differences. I would recommend this to all who are in the mood for more serious manga.