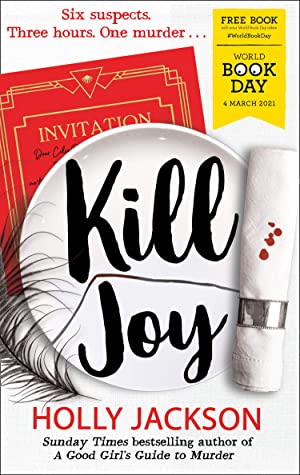 The prequel to one of my favourite series, while I did enjoy it a lot, I am glad I didn’t read this one before the other books…

I was very hyped that this one would be a book for the World Book Day. Well, World is a funny word since my country doesn’t do anything with it. Haha, we have our own weeks for genres/age groups. I was eagerly looking forward to getting it and thankfully Amazon had it.

In this one Pip and her friends are doing a fun mystery murder party. Each of them have roles and each of them have dressed accordingly (though I had a bit of a laugh how the characters who were older were described, I mean Cara just drew some wrinkles on her face that didn’t match at all). The mystery game sounds like tons and tons of fun and I wish I could play it. Get into the roles. Find clues. Get hints from the booklet on what to say/to do. Eat yummy pizza. And as the play continues things get more interesting and more creepy and boy oh boy I would have loved to play along. Be with this crew and see what role I would have gotten. One of the rich kids? One of the staff? I wouldn’t have minded the staff though! I loved how with each new development we learned more about the characters the teens were playing. I was the most surprised about Celia. Oh my goodness.

I loved how everything was arranged and I had a big laugh at the comments that everyone had to the rooms (billiard hall without billiards… a library with just 8 books). The boys definitely went into it and arranged everything in the house perfectly.

The ending was just great, and with that I mean the last couple of pages when we get to the question what Pip’s project is going to be. No spoiler her as this is a prequel. But I loved finding out how she came upon her plan (what was said during the evening and who they encountered on their way home). And now I want to re-read the first book again.

Now for some things I was less a fan off:

I would have preferred if the names of the characters had been changed to fit the game. Now it felt very jarring to have them by their normal names and their game names. Not to mention it was very annoying/jarring that when the characters were playing the games they were sometimes in their roles… and sometimes not. I mean we would get Pip’s thoughts on things and she would be thinking about her (fake) uncle and her (fake) family in a way that only Celia would do. So I would have rather seen them all be the characters they were supposed to be and keep their roles as best as they could with maybe some interruptions here and there when things happened that had to take place in the now. Now I just forgot about the mystery game characters at times or forgot who is who.

And well, while I loved really LOVED Pip’s final deduction… it just felt way over the top. Especially since none of her friends went so far. I mean, it would have fitted more if one of her friends also made a dramatic long ass deduction, but Pip is the only one that has like 3-5 pages of deduction. And while I did agree with many of her points, at times I wondered if I had missed parts of the story, haha. She pulled out several deductions that had me scratching my head. Where the hell did she get those from? The game is pretty simple/straight-forward and she made it something grand. I was however fully on her side given the ending. OMG, I would have definitely also been pissed.

As I said, I am glad that this prequel came out after the other books and I have read those. I know in the beginning of the first book I really struggled with Pip at times. She can be a bit… much. And she shows that very clearly in this one. While everyone seems to be having fun with it and just making jokes, she is totally in it, within minutes she has written countless notes, and she takes it all a bit too serious for me. Never in the book does she really lighten up or get more into the fun. I know that if I had read this book and maybe being curious about the series, I would probably not have read the series. Or maybe gotten them out of the library if per chance (low low chance since they so love their Dutch books) they had it. I could enjoy this book because I know the other Pip from the bigger books.

But in overall, I really enjoyed the story. It was fun and engaging, and I laughed and gasped. Despite some of the issues I had I would still rate this book 4.5 stars.