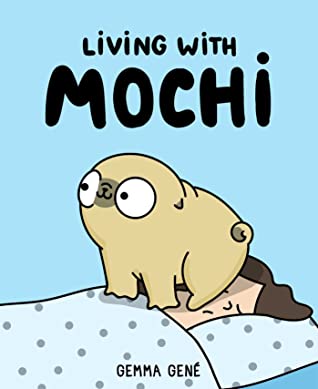 I just love dogs, and pugs especially, plus, I like comics, so I decided to check out what Living with Mochi was like! In the end I did have fun… but the dog was just too human-like/too much Garfield copy.

Meet Mochi, a pug baby (in the beginning). A spoiled little thing who loves food and sleep and who at times does some pretty cute things. We see how life is with a dog and it reminds me a lot of how cats are. Haha, I mean sleeping on laptops, on heads, hogging all the places in bed, and some other things.

I liked that the book was split up in parts and that each part had respective comics for that topic. From sleeping to food to family and more, and then comics following that topic.

I liked the coloured pages at the beginning of each new part/chapter. Those mostly showed the dog as a dog, and not as a Garfield copy.

But I am deducing points because the dog talked/acted human at times. It just didn’t fit in my eyes and made the dog more like a Garfield copy, and really, in the end I just saw Garfield instead of a dog (and while I do love Garfield, even he gets too much). The mannerisms, the entitlement, the love for food, the eyes, the movement, the way he talked, it was just so Garfield. If I want Garfield, I will read that. I wanted fun dog comics featuring normal dogs, aka I would have rather have the dog silent and more animal-like.

So yeah, at times I liked this.. but at times I just didn’t. And if a book is 224 pages… it can feel endless. I am giving it 2.5 stars in total. I would have loved to rate it higher, but the dog was just frustrating/annoying/too much a Garfield clone.