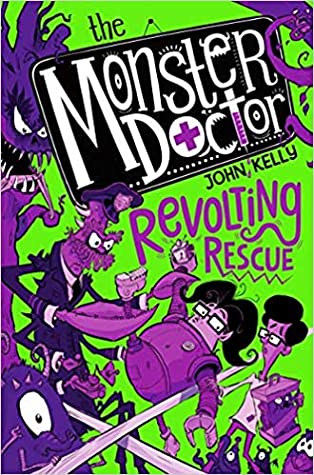 The second book in the series and I laughed so much! Cuties, triffids, a new nemesis, and much more!

This time we meet QT also known as Cutie. Yep, the cuties are here and the monsters are dead terrified of them. I had quite a laugh at that, and also loved that monsters aren’t the only one affected by things! Oh no, humans can also get a case of M.U.S.H.. And what that is and what it entails? You will have to read the book! But I can tell you it was tons of fun.

Triffids and cuties were both fun monsters and I love finding out some fun things about them. I had such a big laugh at the end and what Delores did and said there. Oh Delores, I would have so done the same if I had a husband with a hobby like that. Teehee. 😛

I am not sure if it was a fault in the actual book (the author overlooking it) or that it was meant to be wrong (because monsters don’t know everything about triffids), but when Ozzy reads about triffids there is a clear mention NOT to under-water them, instead opt for over-watering them. HOWEVER, the next page of that guidebook states that one must NEVER over-water.. That had me seriously scratching my head. So you want me to over-water but HOLD ON no?

Percival was the worst character and actually made me like the book a bit less at points. I get that he was the bad guy, he is meant to be horrible, but really, no just no. He was obnoxious, annoying, and boy I would have

Of course, like the previous book, this one is full to the brim with fun and fabulous art, it really made the book come to life even more and made me laugh even harder at some scenes.

All in all, I really enjoyed reading this and I will be eagerly looking forward to the next book. Which yes, I ordered just before I read this one (so by the time this review pops up I should have it in my hands given it will be a week by then). I would highly recommend this hilarious series to all.