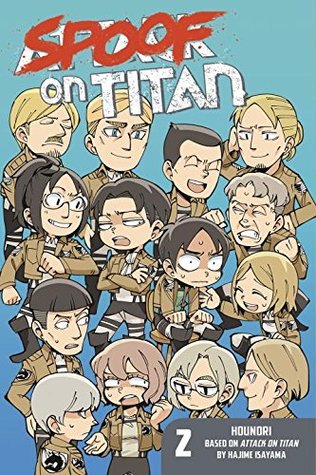 More spoofs on Titans. The second volume and full of fun and hilarious moments.

So, 5 years after I read the first one I am reading the second one. I believe I bought this one for my hubby some years ago (a bit after I got the first one). I still haven’t watched or read AOT, well, I did try, but the gore levels were just too high for current me. Haha, I am sure if I watch this show when I could watch gore without almost puking immediately I would have loved it.
But I do love the franchise, the characters. My husband loves the show and thanks to him and these more funny books in the franchise I know about several things. Oh and also spoilers online because people on Twitter love doing that.

In this one plenty of hilarious situations, it is as if the titans are not even there for most of the book (though Hange tried to get Armin to confess his favourite type, yes really). We see lots of fun scenes, like when Connie decides to draw a moustache on his face and Eren (of course Eren) also participates. Or the Momotaro fantasy story with a few new twists at the beginning. There are also ghosts, we are going back to school (Kyyaaaa Levi-sensei), a new mission and I laughed seeing Armin as Historia, there is farming, booze (some of these guys shouldn’t drink so much), chairs, and so much more. I had tons of fun reading it and it brought a big smile to my face.

Best quote; “Are we potatoes? No, we are the planters.”

There were only a few moments that had me wishing I could watch the show. The part in which Mikasa is recovering from a broken rib and Levi from a leg injury for instance. I had no clue what happened, but I am guessing something big happened in the show or original manga. It was still fun to read and see Mikasa make rabbit apples, but I think I would have appreciated this, and a couple of others more if I had seen the show/read the manga.

The art was just great and I like the style. It fits very well with the AOT franchise.

All in all, I am kind of hoping for more funny AOT manga or even anime! I think I have checked them all out now so I am in for something new. And I would recommend this book to all, but make sure you have at least some knowledge of the show/manga.