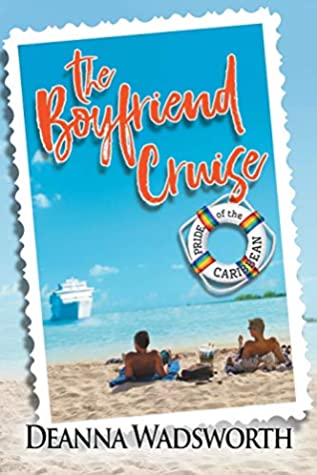 Welcome to The Pride of the Caribbean, where all your wishes come true, literally. Haha.

Recently I participated in the Release Day Blitz for the second book in this series and I was instantly mesmerised by the series. I wanted to read it! I was delighted to find out that book 1 was out in paperback and so I immediately bought it. I love books about cruises and if there is some hot romance then I am even more into it.

Meet Nathan and Josh, two guys who both find their lives flipped over when they meet each other on the ship. Josh and his family are passengers and here to enjoy a fun cruise and celebrate Christmas, whereas Nathan is the ship’s photographer and singer and some other fun job titles. From the start you could see the sparks fly through the sky. Each of them feels a big attraction to the other. Normally I am not a big fan of instalove, but when done right I could love it, and I have to say that it was well done in this one.

I love that Nathan is incubus, though I have to be honest, after 10 times I got it. He is mostly human with a dash of incubus. It really shouldn’t have been said that much. But I did like that the author gave us a glimpse in Nathan’s life before he met Leonides and came aboard the cruise. It was heart-breaking, I am glad he found a family. Or well, ish. Given that people still treat him as a demon instead of the, as mentioned many times, 75% human he is. Nathan was also a fun and great character, he is sweet and kind and he respects all the boundaries. For instance, he and Josh were ready to have sex together but Nathan decided it was a hard pass since Josh was just too drunk. What followed had me laughing as Josh was clearly drunk but still could protest and pout.

Josh is a fun character. I really loved learning more about him, see what makes him tick. I could often relate to him. Yes, I am not a guy. But I could understand how he felt to be less experienced with sex, with relationships, with being with someone. He is worried about his weight, his body. I loved how he opened up to Nathan, how he could tell some of those fears. Plus, I just cannot resist a person who loves books~

The relationship between the two was a bit fast for me… but given certain demon rules I guess it was inevitable for the book to end otherwise… well, I guess it could have ended in tears, but who wants that in their romance novels? Haha, I am sure there are some, but I like myself some yummy HEAs.

OH, OH, and plus for no dramarama. Yes, I feel the need to add this given that almost every romance I read has dumb drama around 80/90%. Drama that is totally unnecessary and often just would be solved in a page if people just TALKED. But in this one? There is near the end some confusion between the characters, and frankly, I could understand. I would definitely have responded the same as Josh. It is a big thing that Nathan just told him. But these two do talk. Do sort things out.

Oh, and I love how this one is not just a cruise for LGBT people…. but also a cruise for paras, aka paranormal creatures. From faeries to gods to witches. We meet quite a diverse cast of paras and I just love that they can be free and open about themselves on this ship. Most people think they are just cosplaying. Oh if only they knew! Plus, I love that the ship itself is also magic with an own will even. One moment you are planning to go to x island.. the next you are somewhere totally different.

The sex scenes. Oh LORD. The scenes are just hot! I love how the author build up the sex. And for a reason as we find out later in the book. The guys are going at it in various places, sometimes also still clothes but dry-humping or teasing each other. I was wondering how those latter never had anyone call them out for things. I mean, the ship isn’t that big, so um…

The ending. LOVE LOVE it. I also love that we  got an epilogue. Definitely plus points for me when authors add epilogues to romance novels. I am always curious how it is going with our couples x months or years later.

While I loved that the family was supporting of Josh and even booked this special tour for him… I found them mostly deeply aggravating. The mom and the sisters (counting the sister-in-law) especially. Mistletoe on a rod. Shouting in the middle of a ship that Josh is single and hot. Talking to random guys and try to hook your son up. Not respecting his boundaries when he clearly tells you to not do things. Not considering his feelings. When he finally has a hot guy you keep undermining everything. I mean for real. Josh finally had a sexy man, finally had someone to like, and all his family do was try to hook him up with other guys because Nathan was an artist (which is not a job that fits in their little picture) and just a fling and more of that. I was just so angry at the family. Great that you support your son, but you also need to respect his fucking wishes. Even later I was just hurt that they had comments on the

The family was truly the only thing in this entire book that I didn’t like. The rest of the book was, as I said, fantastic. With great characters, great sexy times, and more.