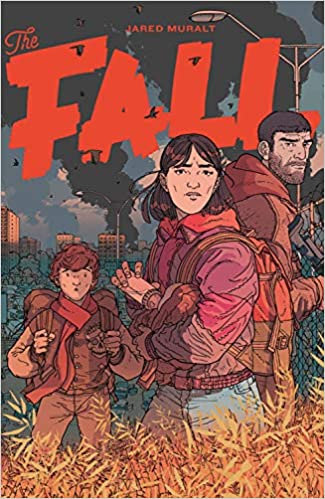 I received this book from Edelweiss+ in exchange of an honest review.

Yep, I am now even going through Edelweiss+ to see what I can read! Haha, searching books everywhere so I got enough to read and hide.

This book was a bit too close to comfort at times, but still I soldiered on as it was also interesting. Though yes, sometimes I just had to look away. While thankfully things here seem to not go as far as the world of the characters, it was still too much. My not so OK mental health couldn’t take it a lot.
This book is about a world with a deadly flu, quarantines are happening, vaccins are apparently also happening though I guess given how things go from worse to horrible they aren’t working or there isn’t enough. So slowly the world is just falling apart (for reals, the world is a freaking mess, garbage piles everywhere, people are looting, people murder, people go for violence, and so much more. It was quite horrific to see). We see how a father tries to be there for his kids in this situation. We see how he tries to find food, find safety, find somewhere to go. They come across some horrific situations that no one should see or be in the neighbourhood of.

At times I was just confused about what was going on, things got a bit muddled nearer to the end. I just couldn’t always recognise the characters any more, at least not the boy and the girl. Haha, even at one point I thought the boy was the girl and was wondering what happened to the gun or the deer.

Plus, while I did like the first half of the story things just got less and less interesting and a bit too much/too gruesome/too weird/too boring for me in the second half. I struggled through it as I tried to keep up, struggled as I tried to keep myself interested. It was an interesting character study though, seeing how everyone tries to do something to survive. Most people just think of themselves so I loved that our family tried to stay together and tried to help the other out. I do think it was a shame that dad got wounded and that his kids had to struggle on their own/have to help him. The dad was my fav character and I just didn’t like seeing him like this. I wanted him strong and up on his feet, helping out his kids and figuring a way out of this hellhole.

Also, how did no one get sick with the flu? I thought it was so contagious and so deadly? Yet, the people for now just died because they get shot, stabbed, punched, or some other violent way. Everyone is holed up in those apartments and no one seems to get sick.

I do wonder how the rest of the world is doing. Is everything in chaos?

The art was OK-ish. At least at first, later on I just got less a fan of it.

Another problem was that the font was quite small and ADE is a piece of junk that, if you try to zoom in, just crashes or makes every page go by in slow motion. My eyes are good enough but mini font + reading on a pc = recipe for disaster. But hey, my abs got a good exercise with this going back and forth movement. XD

Will I be reading the next one? Not sure. I will need to see something cute and funny to get my mind right again. I am not sure if, by the time the second volume appears, Corona is still around and how big. If it is still around, I probably won’t read. Plus, given how muddled things got in the end and how I struggled… the second book has to be really awesome for me to read it.