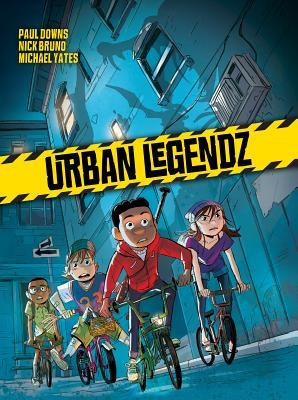 Monsters/urban legends are rising up and Brooklyn is in trouble! It is up to Dwayne and his friends to fix the situation.

Given that this is the first volume I had expected that this would be an intro into the world of Urban Legendz/s. Instead it is a full story! It takes place in Brookly, and according to the ending the next will be on Coney’s Island. Now I am curious if the author will go for other boroughs/parts of New York as well and I am of course curious what legends and monsters we will see in that one.

In overall, I did enjoy the story, BUT, due to it feeling like an intro yet having a complete story has thrown me off and at times it just felt a bit too stuffed and too rushed. It is just 112 pages, and I think that it may have been better if the story had been spread out over 50 more pages. Just to get a better feel of the story, of the characters. Plus, I still am curious what happened to those who were taken. Dead? Not dead? Something else?

The story begins with Dwayne and his dad and brother going to live with his grandmother after the death of their mother/wife. My heart broke for this family. We see how each family member is dealing with the situation.

I loved that Dwayne made friends so quickly, BUT I wasn’t happy how they pressured them to steal his dad police phone thingie (lost the word for that, haha). But after that they did improve and I started to like them quite a bit and I loved that we learned quite a bit about them.

The monsters were creepy and scary and OMG. They were really well drawn and I loved seeing the various monsters appear. Since I have no clue what Urban Legends they are meant to represent I just saw them as normal monsters. I think out of all of them… the bugs were the scariest. I already don’t love bugs, but this was just too much for me.

We get more and more clues on why these monsters have awoken and we also see our group along with other friends find solutions and get ready to kick some monster butt. Though in the end there is a lot more going on with the monsters than the kids may have expected and what I expected.

The ending was good, but as I said, it felt a bit rushed and a bit too magical. I am happy of course that that person has had a change of heart, but it felt too unnatural, especially given what we know about that person.

All in all, I am still happy I read this one, it was just what I needed. Something with monsters, something exciting, but also a bit emotional. Great art!