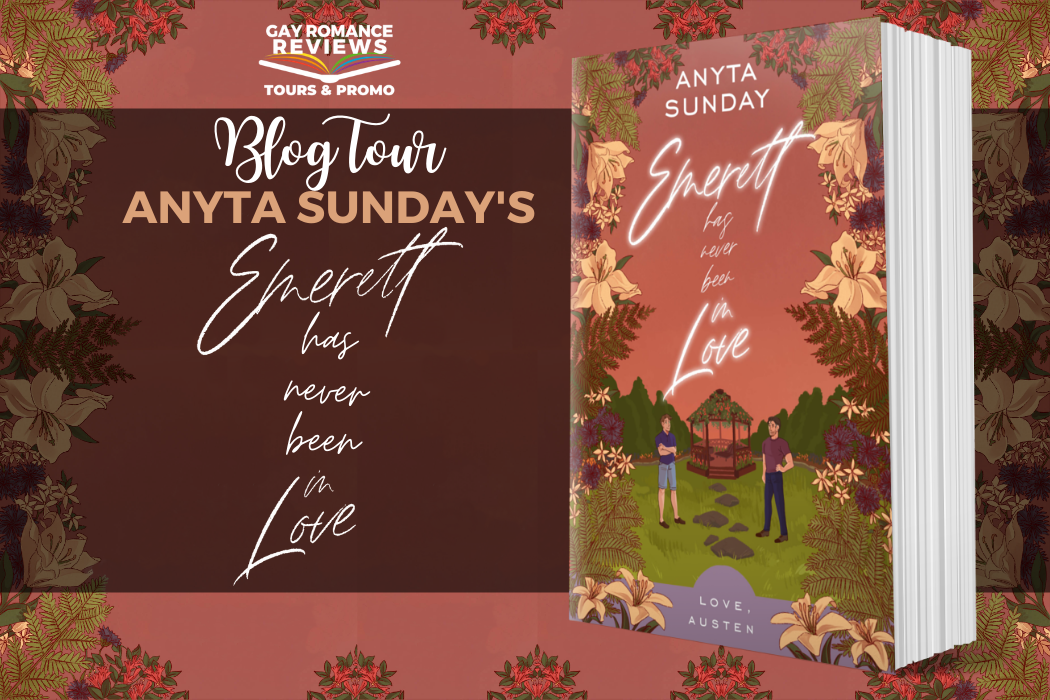 A warm and fluffy welcome to Emerett Has Never Been In Love by Anyta Sunday! I just HAD to sign up, first for the cover and the title, and then I read the blurb and just loved it! I have plans to read it, hopefully soon I can get the book!

For today’s post I got a ton of things! Teasers, a giveaway (20 dollar Amazon voucher + e-set of the Signs of Love Series books), I got an excerpt, and oh yes, let’s not forget book/author information! 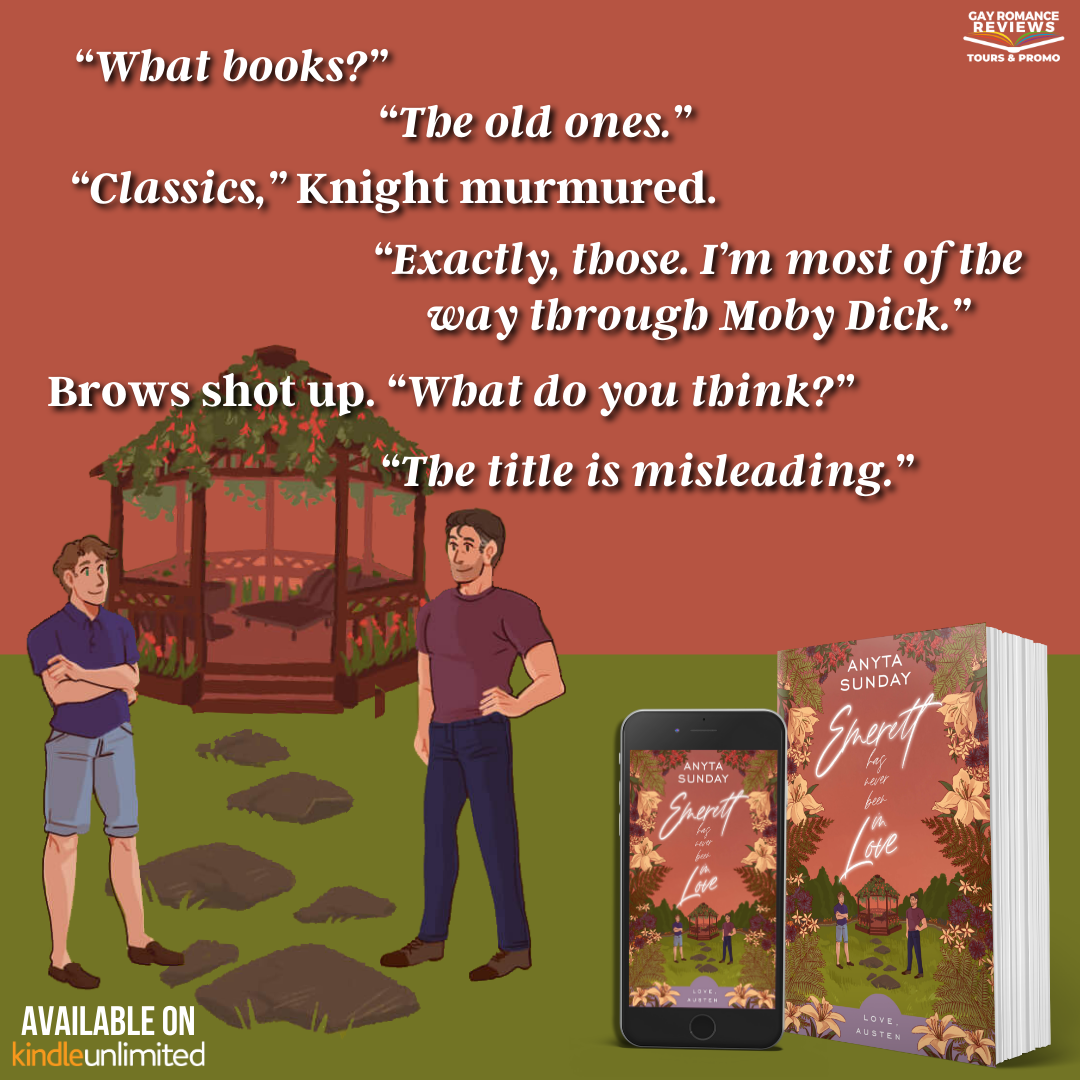 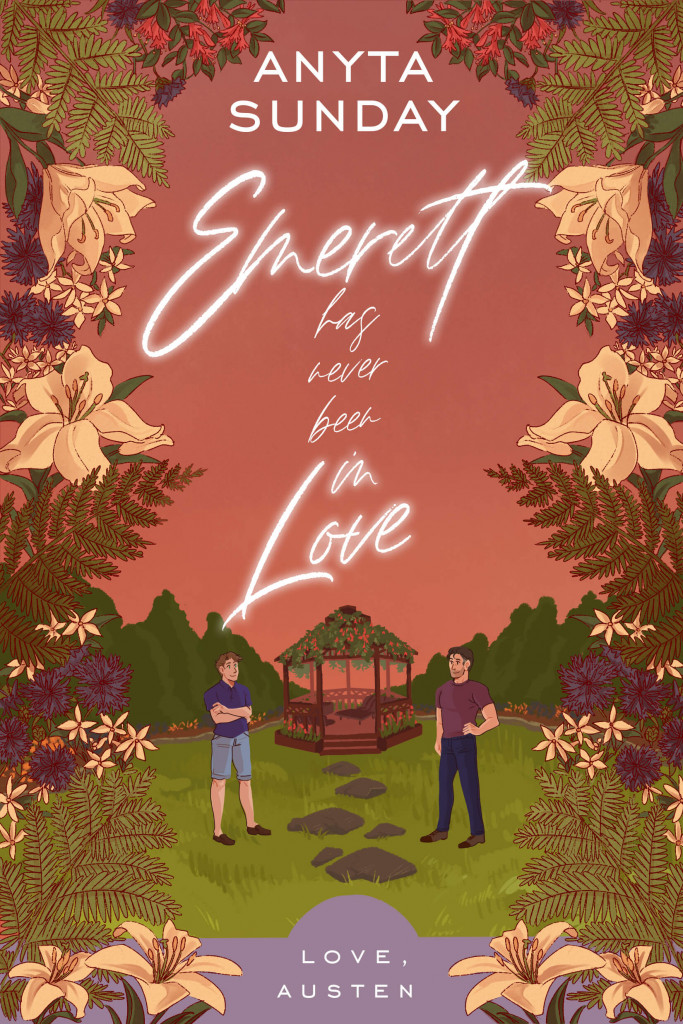 A man who acts before he thinks, a man who thinks before he acts, and the ensuing mishaps on the path to the ultimate love match.
~ ~ ~
Emerett “Lake” Lakewood has a healthy ego and a flair for the dramatic. After losing his best friend to marriage—completely crushing his heart—he deems it prudent to distract himself, and what better way than playing cupid?
He’s already got his eye on two young men desperately seeking romance, and he has a plan to hook them up.
Barbecues.
Photoshoots.
Reciting Shakespearean love declarations.
Lake is killing it. Love is positively pulsing in the air. Anyone could see it.
Well, anyone other than Knight, his best friend’s dad, who cautions Lake to stop meddling. To leave love to its natural course.
Lake has always valued Knight’s frankness, but this time he’s wrong. Without him, two hearts might be doomed never to find love.
Besides, what does Knight know about romance? He’s barely dated in all the seven years Lake’s known him. He’s clueless. Though, there’s a thought. Knight has everything going for him. Sensibility. Kindness. Generosity. And for a forty-four-year-old, he’s—objectively—freaking hot.
Why is he single?
~ ~ ~
“. . . [T]here may be a hundred different ways of being in love.”
~ Jane Austen
And a hundred different ways not to recognize it. 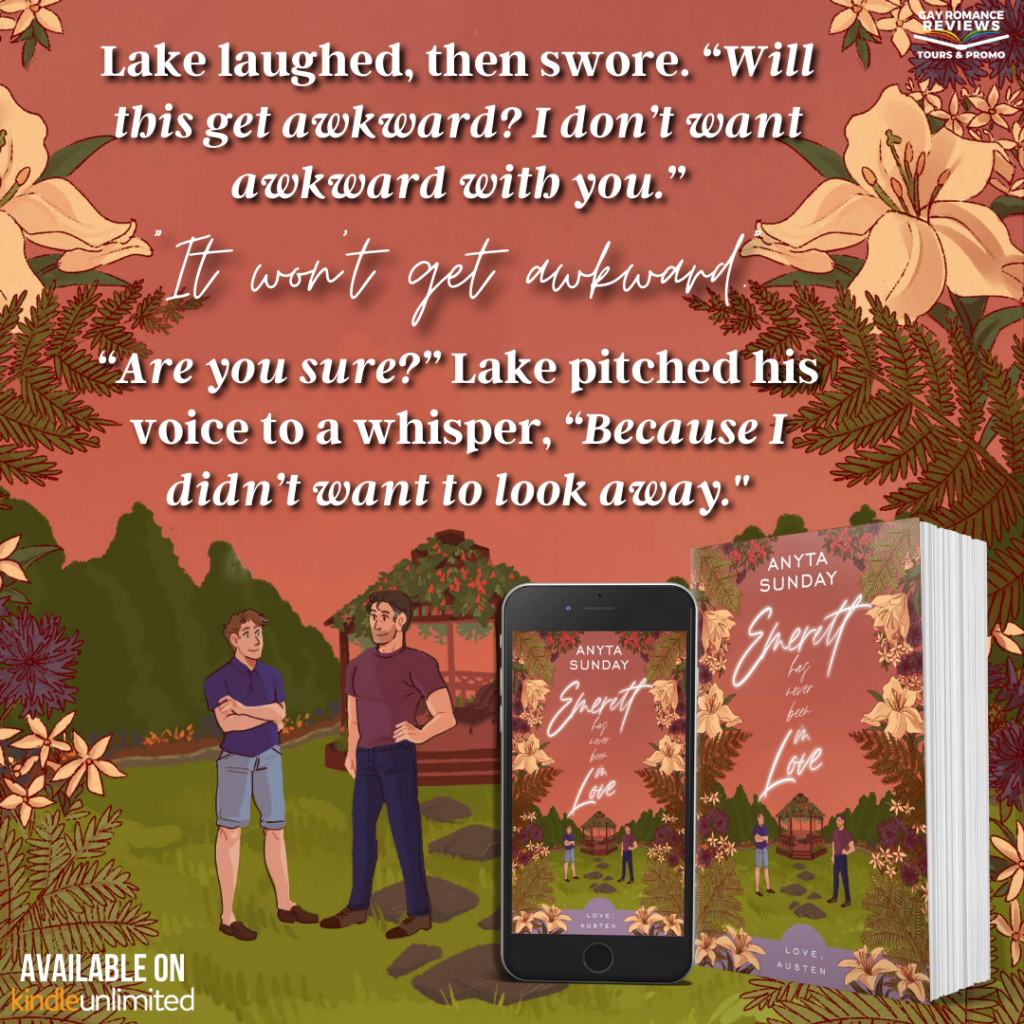 I’m a big, BIG fan of slow-burn romances. I love to read and write stories with characters who slowly fall in love.
Some of my favorite tropes to read and write are: Enemies to Lovers, Friends to Lovers, Clueless Guys, Bisexual, Pansexual, Demisexual, Oblivious MCs, Everyone (Else) Can See It, Slow Burn, Love Has No Boundaries.
I write a variety of stories, Contemporary MM Romances with a good dollop of emotion, Contemporary lighthearted MM Romances, and even a splash of fantasy.
My books have been translated into German, Italian, French, Spanish, and Thai. 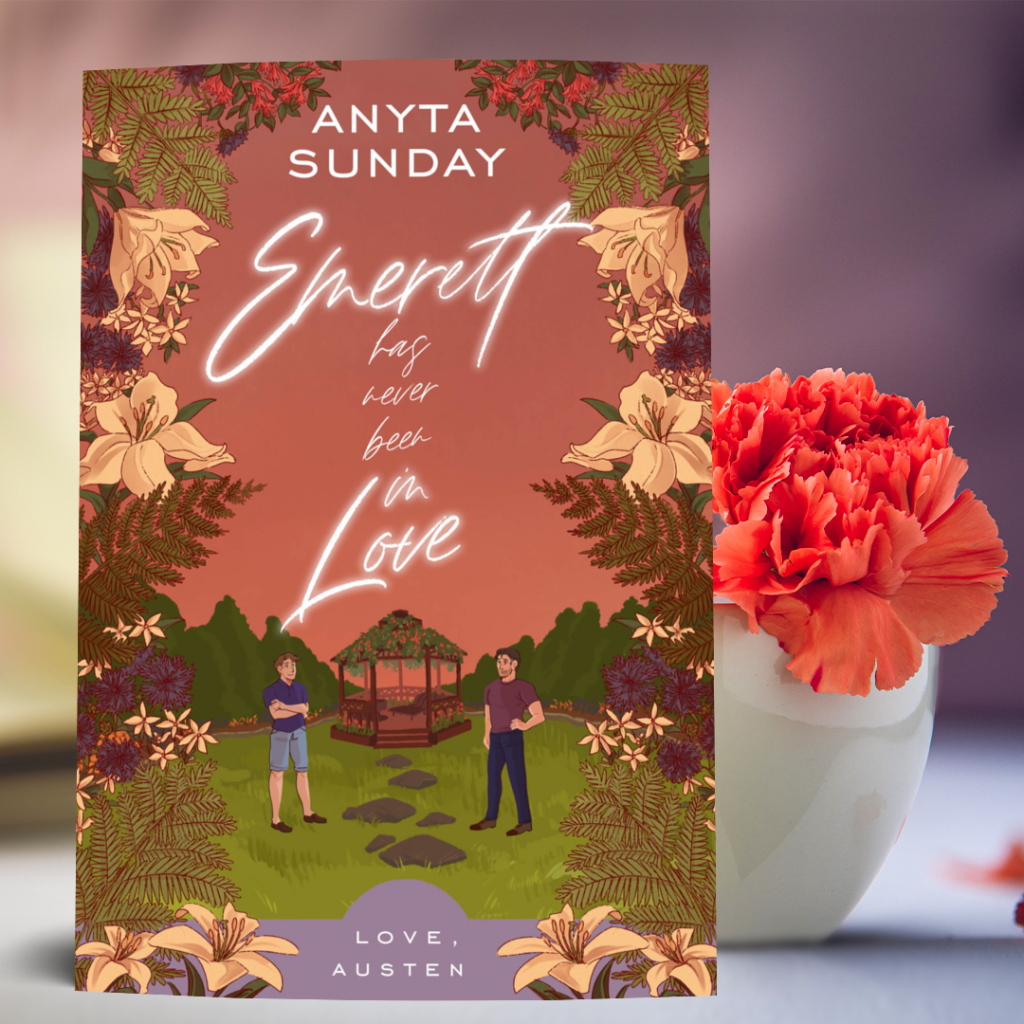 Knight stood at the fireplace, head bowed, brows sloped into a frown. Sunlight from the windows printed a large square of light over his T-shirt, jeans, and the heels of his naked feet. Lost in thought, Knight pinched the lily he’d left on the mantelpiece by the stem, shutting his eyes as he breathed in that creamy-clove scent. A weary sigh sagged his shoulders.
Tenderness thumped in Lake’s chest. At Knight’s fond smile, he pushed into the room.
Knight’s head shot up and he clasped his hands behind his back. “Lake.”
Lake smiled softly. “You miss your son.”
“My son?” Surprise—confusion?—flickered over Knight’s face.
Lake gestured to the lily behind him. “You don’t have to hide it from me. I like the reminder that you’re human.”
Knight paused, and returned the lily to the mantelpiece. “All too human, I’m afraid.”
“Don’t worry. You hide it well.”
“That seems the right thing to do.” After a beat, Knight looked over at Lake with practiced tolerance. “The barbecue is not until next Sunday. Why are you back?”
“Why do you think I left?” Lake dropped his satchel onto the armchair and draped himself on his favorite couch. “I promised to help at the food bank. I’d have been here an hour ago, but Philip needed a ride home. He hates being in his big empty apartment. He was reluctant to get out of the car.”
“And you think the apartment is the reason?”
“I invited him to the barbecue—you should have seen how fast he lit up.”
Knight’s lips rolled into a half-grin, yet his voice resonated boredom. “I can imagine. Why are you back?”
A yawn pulled at Lake, deep in his chest. It had been a long day on little sleep. “You have two guestrooms.”
“You have an entire cottage and your father’s old distillery.”
True. However . . . “Neither feel the same since he passed away.”
Knight spoke tentatively, “It’s been years . . .”
“Years practically living with you and your son.”
Knight narrowed worried eyes on him. “Or years avoiding the past?”
Lake waggled a finger at him, grinning over the lingering pain of losing his dad on the heels of losing his mum. “Shrewd man.”
“My son doesn’t live here.”
“Shrewder still.” Lake sighed. “His and Amy’s new house isn’t the same. I feel like a third wheel.”
“That would be an accurate assessment.” A pause. “You were a third wheel here, too.”
“Yes, but it was easier with you.” More comfortable. He could always be completely himself.
Lake fished for the remote on the coffee table, not quite reaching it, but not quite willing to work for it either. He threw Knight a cheeky wink. “I’ve taken your guest room upstairs. We’re sharing a bathroom.”
Knight moved to the coffee table and offered him the remote. “Have you considered finding a more permanent living arrangement? Selling your inherited properties?”
Lake took the other end, but Knight didn’t let go. Awaiting an answer, of course. “The cottage maybe,” Lake admitted, “but the distillery has been in the Lakewood family for generations. Even though it’s sitting there unused, it feels wrong to give it up.”
Knight released his hold on the remote. “Start with the cottage, then.”
“It’s an awful lot of organizing—” At Knight’s flattening lips, Lake started nodding “—which I will get on to, very, very soon.”
If Knight were inanimate, he’d be an actionable item list. Procrastination was uncharted territory to him. He screamed checkbox, and a smarter person would grab the nearest pencil and start checking.
Lake offered up his most charming smile. “And until I get around to it?”
Knight sighed. “The guestroom downstairs has its own bathroom.”
“So actually, about that room. I had a thought.”
“Why do I suddenly feel anxious?”
Knight plucked up the remarkably preserved lily—all that hairspray, perhaps?—and hiked toward the archway that led to the dining room.
Lake rolled off the couch and skedaddled after him to the open kitchen. Door knobs, light fixtures, faucets, and hinges were all wrought-iron. Everything so charmingly rustic, a horse braying in the background wouldn’t have felt out of place.
“Amy’s cousin Harry. Early twenties, cute face. Auburn hair and freckles.”
“I recall. Very polite, very happy. Danced with his grandmother and his cousin most of the night. Seemed impressed with the wedding ceremony and reception.”
“He did love the crostini.”
Knight slipped the lily into a miniature vase and side-eyed him. “He wasn’t the only one.”
“Are there any left?”
Knight set the vase by the vintage water pitcher Lake had encouraged Taylor to buy his dad for Christmas, and opened the pantry. He brought out a crostini platter. “Picked them up this afternoon. If you hadn’t turned up uninvited, I’d have tracked you down.”
Lake grabbed a baked artichoke and parmesan crostini and moaned into a crunchy bite. “You’re the best, Knightly.”
“I do try, Emerett.”
Lake swallowed at his first name. It wasn’t something anyone else used, just Knight, and only on occasion. But when he did . . . it always jolted him.