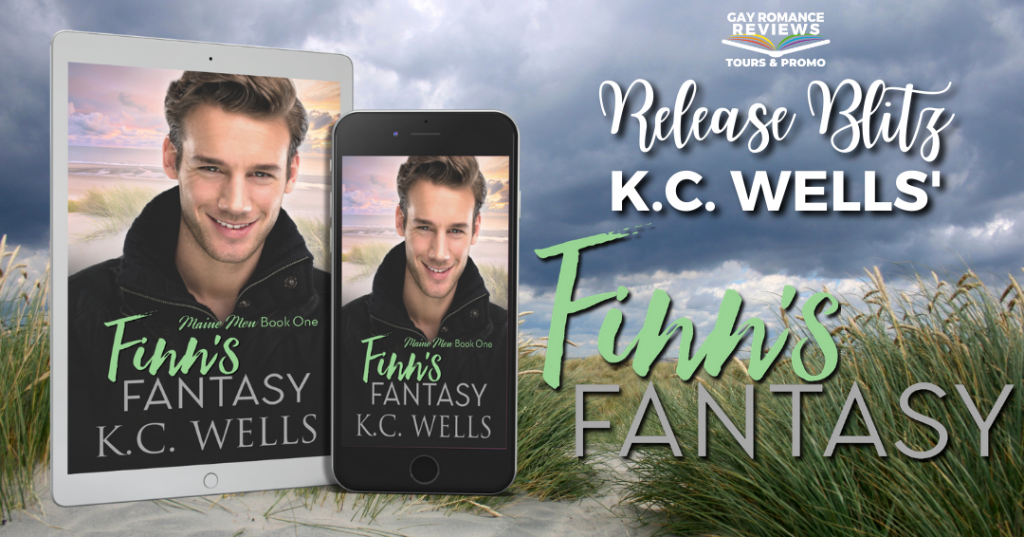 Welcome to the Release Day Blitz for Finn’s Fantasy by K.C. Wells! The first book in the Maine Men series. I just love GRR (Gay Romance Reviews/Tours) and what they promote and I love that I can help promote these amazing sounding LGBT books. This one is no exception. This one just sounds supersweet and adorable and just going by the blurb I want to root for these characters to get together. For now I am a bit full on books, but I do hope to read this one very soon.

For today’s party I have teasers, an excerpt, a giveaway, and of course book/author information!

Happy book birthday to the author! Congrats! I hope you have an amazing day~ May it be filled with cake! 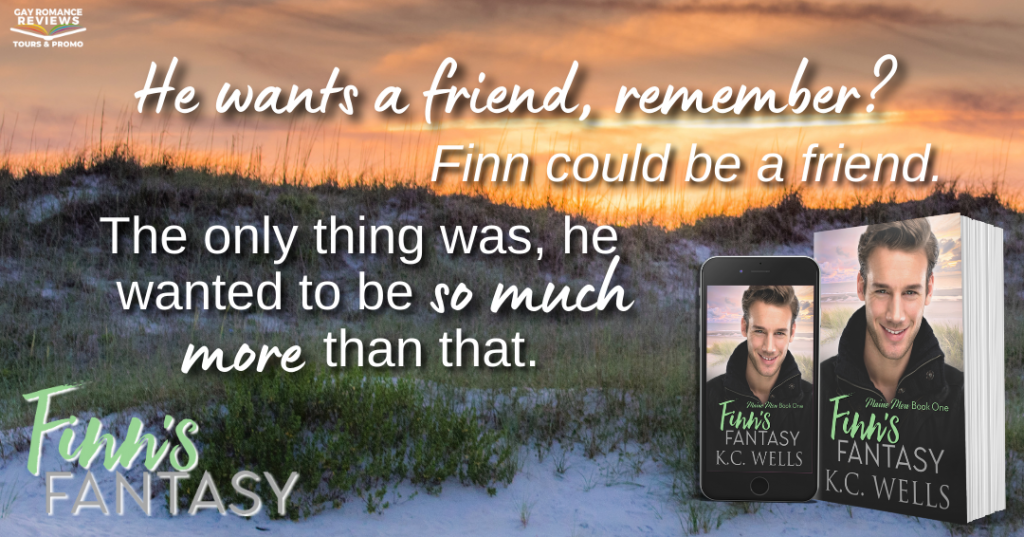 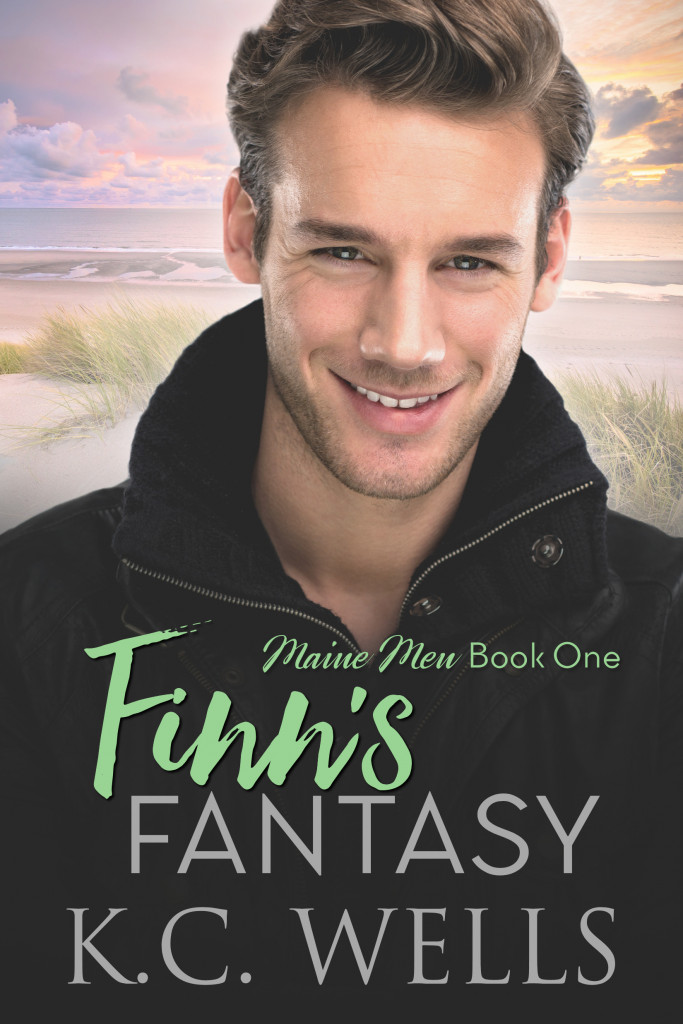 It’s been twenty years since Joel was with a man, and he doesn’t want to screw this up.
Especially with Finn.
A secret desire
By day, Finn builds houses on the coastline of Maine. Afterhours, Finn dreams of the hot older guy who walks his chocolate lab on Goose Rocks Beach. The man of his dreams ticks all his boxes. Salt and pepper hair. Strong jawline. Blue eyes.
His dream man is perfect fantasy material. As for actually speaking to him?
As if. Their paths won’t ever cross, and the guy is probably straight.

A new chapter
Recently divorced Joel is finally living as a gay man, but he’s not sure he’s ready to jump into a relationship. That doesn’t stop him from noticing his new contractor’s muscular build, hewn from hard, physical work, or his storm-colored eyes. Or the way he wears his tool belt slung low on his hips. The icing on the cake? There’s more to Finn than good looks. Maybe he’s the perfect guy to share long walks on the beach and warm nights in front of a fire.
But it’s been twenty years since Joel was with a man. While he’s not forgotten how to flirt, he’s nervous about making a move.
Especially with Finn. 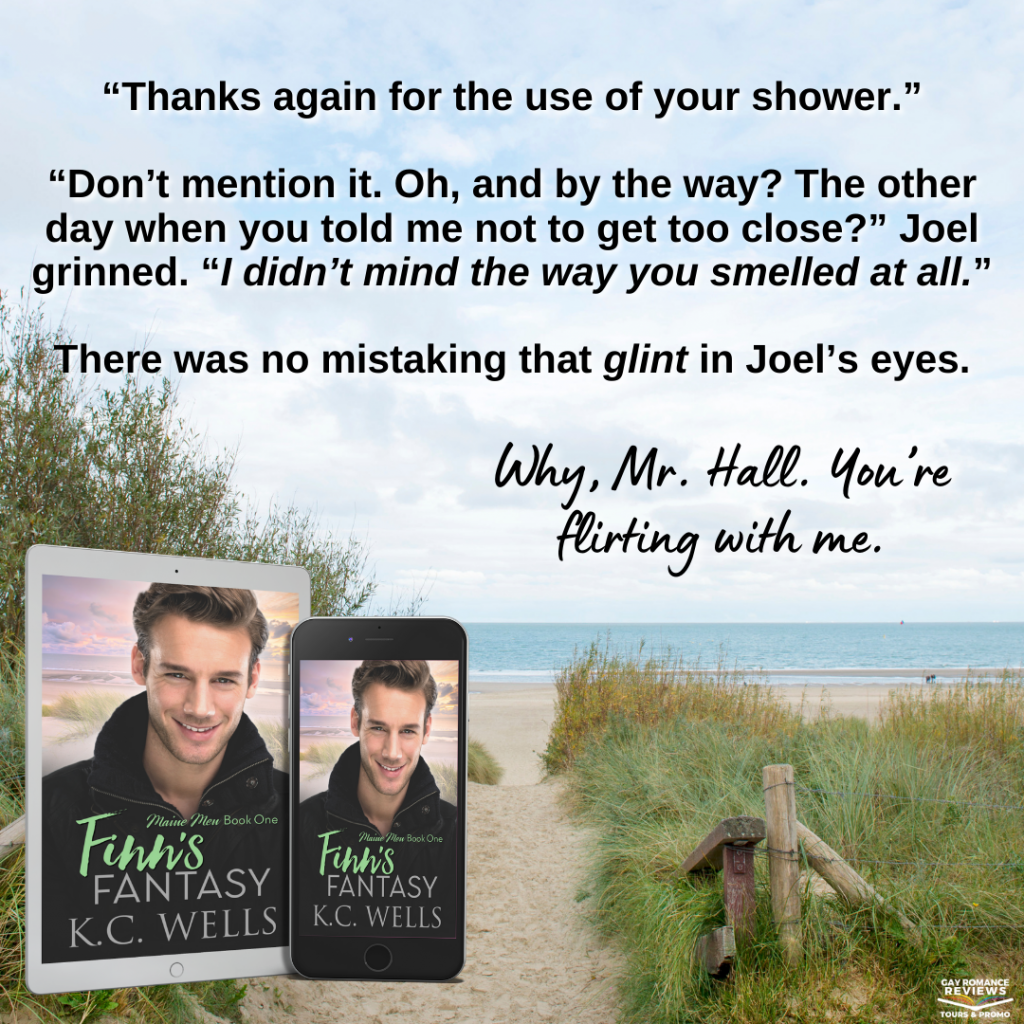 K.C. Wells lives on an island off the south coast of the UK, surrounded by natural beauty. She writes about men who love men, and can’t even contemplate a life that doesn’t include writing.
The rainbow rose tattoo on her back with the words ‘Love is Love’ and ‘Love Wins’ is her way of hoisting a flag. She plans to be writing about men in love – be it sweet or slow, hot or kinky – for a long while to come. 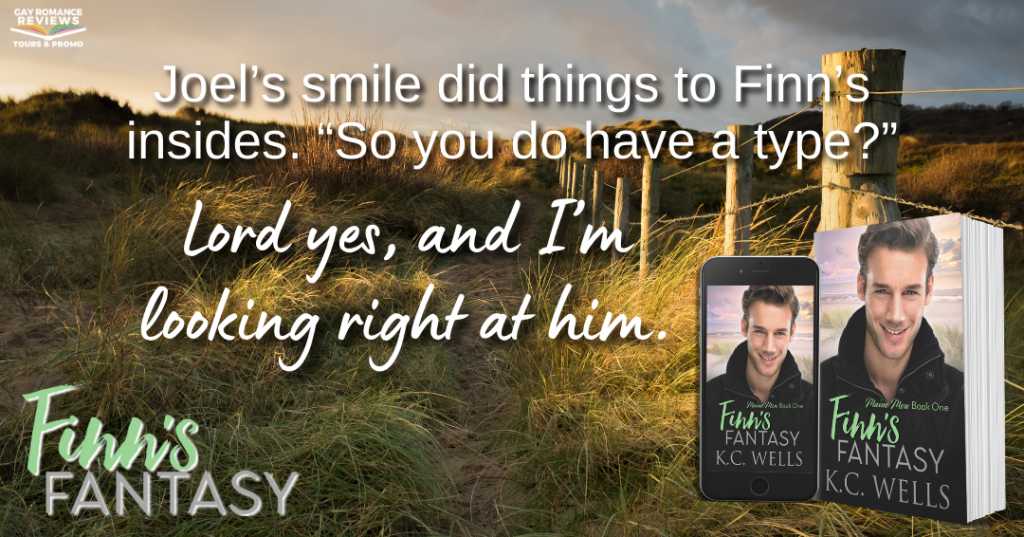 He drove down Dyke Road and turned left onto Kings Highway, heading for the spot where he’d parked the truck earlier. It was still empty. As he switched off the engine, he caught sight of a familiar figure crossing the road in front of him, and a familiar dog pulling him along.
Finn’s fantasy guy, closer than he’d ever been.
Say something. Be friendly. It didn’t matter that the logical part of his brain was screaming but he’s straight. Then all such thoughts fled his mind as the dog lurched forward sharply, pulling the leash from Fantasy Guy’s hand. The dog charged up the beach, heading for the two retrievers playing with their owner at the far end.
“Bramble!” The lab’s owner went running after it. “Bramble, get back here.”
Finn dove out of the truck and hurried after him. “Don’t run after him. Stop. Stop.”
Fantasy Guy turned to stare at him with obvious incredulity. “But he’s running away.”
Finn nodded. “And if you chase him, he’ll think it’s a game. Lie down on the sand.”
The guy widened his eyes. “Excuse me?”
“Lie on the sand, face down. Trust me. He’ll think you’re hurt, and he’ll come back to investigate.”
Fantasy Guy stared at the far end of the beach where his dog showed no signs of returning, and was barking at the two retrievers. “Fine,” he muttered. He lowered himself to his knees, then lay on the sand, his head resting on his arms.
Within seconds, the lab had noticed, and came racing back. He sniffed at him, nudging Fantasy Guy’s arm with his nose. Finn took advantage of the dog’s focus, and walked around to grab his collar. His owner knelt up and did the same, their hands meeting at the dog’s neck.
The owner grabbed the end of the leash. “Okay, I’ve got him.” Then he got to his feet and brushed the sand from his jeans and coat. He gave Finn a grateful glance. “Thank you. I wouldn’t have thought of that. You’re obviously used to dogs.”
“We always had dogs when I was growing up.” Finn nodded toward the dog. “He’s usually better behaved than this.” When the owner blinked, Finn gave a sheepish smile. “You walk him by my house. I live on Wildwood.”
Fantasy Guy gave him a speculative glance. “Weren’t you the one who waved to me the other day? From up there?” He pointed to the hotel.
Shit. Busted. “Oh. Yeah. That was me.”
From behind him came Max’s loud bellow. “Finn. Are you making the nails yourself?”
The dog’s owner smiled. “So you’re Finn. Thanks again, Finn. And this is Bramble.”
Finn couldn’t resist. “Does Bramble’s owner have a name?”
He laughed. “Oops. I’m Joel.” When another cry erupted, calling for Finn, Joel grinned. “Obviously a guy in demand. Well, next time you see me, wave. I’ll know who it is.” He held out his hand, and Finn shook it. Joel had a firm grip. “And now I’ll get back to walking Bramble, but this time, I’ll keep a tighter hold on the leash.” His eyes sparkled with humor.
Damn, he was sexy as fuck.