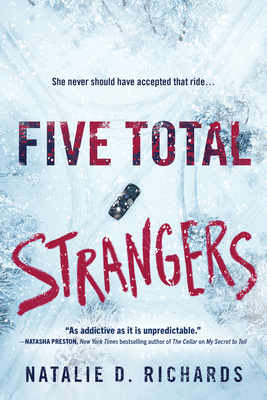 A car, 5 strangers, and tons of snow and mystery.

This one has ended up just like Don’t Tell a Soul, I just cannot think of a rating for this book. On the one hand this book deserves all the stars, but on the other hand at times I was a bit bored or found things to be a bit going to far and I would want to rate it 2 stars, other times it was in between it. So I decided to not rate it.

This was one of the books I wanted to read last year, sadly I have a budget each month and it took a bit before I could buy this book and then a bit longer because with libraries closed I got to balance my books a bit more. But I finally had the chance to read it, and boy, oh boy!

Meet Mira, a girl who wants to go home but due to a snowstorm cannot go home the normal way. Thankfully (if you want to call it that) she has met someone on the plane who offers her a ride. The catch though is that there are 3 other people who also need to come along. I would have definitely NOPED the way out of there. I mean, I could understand Mira’s reasoning, she wants to be with her mom because it is Christmas and it’s been a year since her aunt (and her mom’s twin) died. And I guess otherwise we would have had a story, but still, I just would have noped out. Unless I really know the people, I wouldn’t step into a car.

The start of the journey is pretty tame, just tons of snow, more snow, and Mira worrying about her mom. But then slowly things start to go weird/dangerous. There are near-accidents, stuff disappears, stupid decisions are made, and more. We see the paranoia in the car go up and up as everyone knows that there is someone in the car sabotaging things. It was quite an interesting psychological experiment looking at it as a reader. What do you get when you put 5 strangers in a car and things go wrong? If I had to make a top 5 on characters from best to worst: Mira/Josh/Harper/Brecken/Kayla. Though, B and K eventually shared a last place because I just wasn’t a fan of them both.

Then suddenly (as I didn’t expect it) we get, between the chapters, letters. Letters from a mysterious person who has been stalking Mira for a year. Someone who apparently thought that giving someone a coffee in the hospital and they cry (though not for the reason they thought) means you have a relationship with that person or even are destined to be together. The letters were a nice addition and made the trip in the car even more claustrophobic and scary. Because who in the car, Brecken/Harper/Josh/Kayla, is the letter-writer? Who is the one who wants to do something to Mira? How far will they go? I was constantly guessing and making lists in my head. Everyone was suspect though I could eventually cross at least one person off my list. But that still meant three could be the stalker. In the end I had it down to two people and I was delighted to see one of my guesses was right. That person definitely played a good role to hide what they were up to. And what follows was a very exciting (definitely worth 5+ star) part that had me on the edge of my seat. I had to know how this ends!

The ending (the chapter after all that happened) was OK, I am happy with how the author ended and I liked how everything came full circle.

But there were parts that were just far-fetched or just too boring or just too dumb. A lot was good, but sometimes I just wondered if we would ever get to something exciting.

Oh, and btw, on that creepy hitchhiker dude? I am sorry to say, but I would have also said no. He can be all boohoo about it, but I am not taking a strange weird guy that has been lurking and popping up wherever we are along for a ride. Nope.

All in all, it was a pretty great book and I am happy I had the chance to read it.