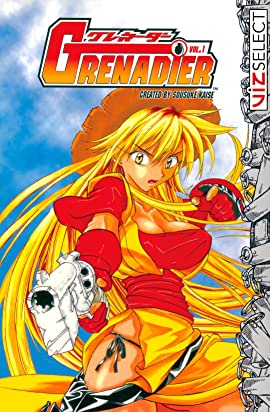 Meet Rushuna, a girl who kicks butt at a daily basis.

I have had two volumes of this book since a long time, sadly, since Tokyopop died and old Tokyopop manga gets harder and harder to find, I guess I will never be able to read further unless I can find the volumes digitally (or someone else picks it up again). I guess I could also watch the anime.

This was a very fun, but very chaotic manga about a girl senshi travelling the world, or well, she tries to get home but she doesn’t know where it is exactly. Along with her is a samurai named Yatchan. Rushuna is a kick-ass girl who isn’t afraid, and rightfully so as she can take down a man with just one bullet. There is tons of action and bullet hell and I loved it so much. There is just never a moment of rest. Even when Rushuna is taking a bath someone will pop up and destroy everything.

Though I would have liked a bit better story, now we go from one place to the next, each time a new battle, without seeing much of the journey in between, which made what happened to feel very off and as if it was nothing. So yeah, that could have been better handled/better written.

The start also could be better as it felt more like a second or third volume at times and I was quite confused if I had missed something.

I love  (at least for most) the reactions of people to Rushuna, since she is a foreigner of course she is blond (which always strikes me as just very weird because not all people who are foreign to Japan are blonde, I mean I have dark brown hair myself), not to mention she is a girl who wields weapons like a pro. A grenadier!

I guess I will soon read the second volume! And then hope that I can find the rest, because I sure want more adventures with Rushuna.