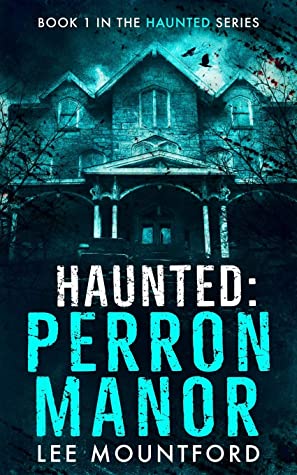 “‘Even if only half the stories are true, I would sya it’s still the most haunted house in Britain.’
‘Brilliant,’ Chloe said, deadpan. ‘And I’m living in the fucking thing.”

I am still very much in the mood for haunted houses and ghosts and so when I bumped into this book I just knew I had to try it out! It sounded positivity haunting!

In this book two sisters (and husband/child for one of them) inherit a house and they decide to live there. Decide to make it their home. Despite the horror past. It was well-written and I loved that right away we got some tension that was build up nicely as the story continued. Things got scarier and scarier with each new night. Woman sitting on bed. The daughter, Emma, pointing to somewhere in the shadows and going “Man!”. Nursery rhymes floating out of the baby monitor. Banging at night. Strange shadows. Dreams. And many more. It was all very frightening and I would have packed my bags as soon as I saw the first apparition. Haha. Bye house.

As the story continues we learn some bits and bobs, but just not enough to keep me satisfied. I am guessing this is so that Book 2 and 3 have some story, but I just wanted it now. I want to know what happened. That is why I rated this one a bit lower. The fun in haunted house books is for me not just the ghosts but also the research. The finding out what went wrong. The trying to understand it or just run away.

I would have never gone back to a house that my parents/family fled away from when I was six because someone was murdering the guests. I mean, NOPE. I get that Chloe has zero recollection of the event, but oh boy oh boy, I would just have skipped it. There must be a reason your parents fled. A reason why your uncle could live for this long in that house.

I found it interesting that only Chloe truly saw the horrors of the house (oh and Oliver, RIP that dude (he didn’t die, but dang, that was scary)). Sarah had some things happening to her (including naked sleepwalking to that one room..) and she did get some glimpses, but nothing the sort that Chloe experienced. I mean, it is normally already tough for the one who sees, but generally they only have to deal with just one person close to them not believing…not two.

I have to say I found Sarah’s POV OK, but as things got more heated. Ghosts started showing themselves more and more, but of course only to Chloe. Sarah changed into a caring sister into a big bitch. I am sorry, but that is the truth. She totally changed and I am still not sure if that is her being herself or if the house had some influence on it. I actually kind of hope the latter, because the third book is apparently fully Sarah… And after the shit she spewed over Chloe? I am not a fan. She totally went overboard on Sarah. She is your freaking sister, hello, a bit more care and compassion would have been nice.
We learn that Sarah has been in the army and has quit following the gruesome death of her friend. As the story continues we learn more about the incident and also how Sarah is doing at the moment (not so good given her dreams are full with red mist and body parts).

Andrew, the husband, was OK-ish. He was at least kind to his wife when things happened.

Chloe, was an interesting character and while I felt sad that she had to experience all the spookiness, it was interesting to see how that affected her. How it was first fear and disbelief, into fear and NOPE, trying to run away. I would have liked to see her remember things from the past though, even little glimpses would have been fine.

Could we also please, in the third book (when we go back to Sarah), not have the constant talk about Sarah’s coffee? I get it, you like hazelnut and your sister hates it. That was funny once, but it kept being mentioned so much that it actually got annoying.

I will probably be reading the next book as well. Not sure when. I did try the second book but it couldn’t grab me, but then again, that may have to do with me having another book on my mind (Don’t Tell a Soul). Guess after I finish that one I will try again.

I would recommend this scary book to everyone.