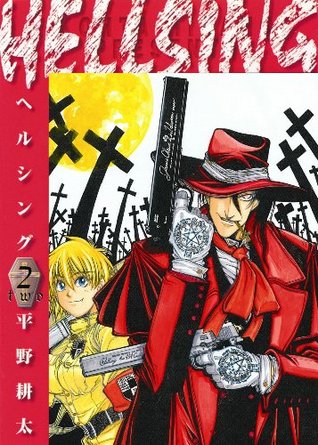 The second exciting volume of Hellsing, and BOY I am loving the manga so much!

For my vacation I decided to bring along Hellsing and I am glad I did. It made for a great read after a busy (but fun) day of bicycling and walking. In this volume tons of exciting things happen. We meet the Twelve, there is an invasion along with epic battles, Seras shows some mercenaries that she is a vampire, we get hints to Millenium/Hitler (yep, we are going that way), and there is tons of more that had me on the edge of my seat and not being able to stop reading.

The first 4 chapters were action-packed. With an invasion happening and tons of ghouls running around (which was both scary and sad given who these people were). I just LOVE that we meet Walter and see that not only he is the butler, oh no, he can kick some serious butt. I was just so impressed seeing this old man do some epic moves and is able to fight on his own. I hadn’t expected that. Well, I guess if I remembered the anime then maybe it wouldn’t be a surprise, but I watched the anime a long time ago. Haha.
I love the battle between Alucard and Luke Valentine, boy oh boy that one was awesome. I especially loved Alucard’s reactions to everything, especially later on in the battle.

There is also talk about Vatican, politics, and some more stuff, I wasn’t too interested in those, they are a big part of the story, yes, but I am just no the girl for that stuff. So I noticed that I had to re-read some stuff as I was just distracted.

I am thankful there is also plenty of humour in this volume to balance all the gore and action. Like when Seras has to show the mercenaries she is a vampire and Alucard just casually pops up out of a wall. 😛 Or when Anderson and Alucard are about the battle and Seras walks in with a tour group (it is a museum/hall with stuff).

Something that I also like is that there is cursing, haha, this sounds like I like cursing, but I mean more that a lot of manga are pretty clean, but this one unleashes some shits and fucks and other things. It fits with the scenes so I am glad that they added/kept the curses.

The art is still fabulous, I love how well the style fits with the crazy story.

I will soon be reading #3 and after that #4, sadly after that I will have to do some hunting to find more volumes. I would recommend this manga to all.