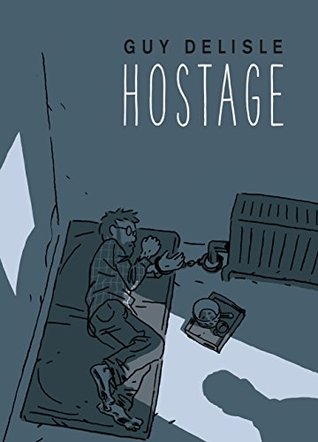 A wonderful drawn and written account of a man who was kidnapped while on mission and the harrowing months that followed.

I am a big fan of Guy Delisle, I came across his, in Dutch translated, graphic novels a year or two/three back at Library #3. These were his travelogues about his trips across the world alone or with his family. I really love his style and how he can tell a story. So I was very eager to read this one when I discovered it. It sounded very interesting. This time not a story from Guy Delisle POV but from someone he knows, someone who went through something terrible.

In the middle of the night Christophe André was kidnapped and taken away from all he knew. It was very interesting to read and my heart broke that he had to go through this. Stuck to a radiator, watery soup and tea and maybe some bread, switching locations, mental health breaking, and not knowing if he was ever going to get out or not as it seems nothing is happening.

Later on we learn that the NGO was doing their best and they were doing all they could for Christophe. But from the POV we get (Christophe) it does seem like nothing is happening. He is mostly just stuck to the radiator, lying on the ground. Only occasionally we see the kidnappers do something. Like give him items to talk. Photograph him.

We see how he tries to get through the days, some days he just thinks off books, family, and battle generals. Yes, that last one was a bit boring and I found myself skipping those parts to get back to the story. I am sorry, I just don’t have anything with war and battle tactics. Other times he was plotting escapes and wondering if he could get out. But sadly always realising that no, he would never be able to escape without dying or getting hurt real bad.

Sure, it got a bit monotonous/repetitive at times because most days were just the same over and over again, but I just didn’t mind it that much unlike in other books.

The ending was WOW and while I was already into the story I found myself even more invested, would he be safe? Would everything go all right? I was rooting for Christophe and found it a very brave move. I think I would have done the same after all these months. There just comes a time you have to do it. Try it. And then came the later parts and even though he was safe there was still danger, I couldn’t wait until he was safe in the airplane. Safe and flying away.

Guy DeLisle has done it again, another fantastic graphic novel. Definitely would recommend it.