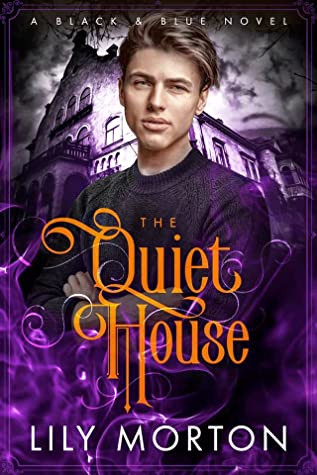 The second book in the series! I am so delighted that I could continue this series, though now the wait begins! Yes, I am definitely hoping for more Levi & Blue. More ghosts. More hauntings! So, please Lily Morton, make more!

First up, sorry if the review is a bit chaotic, I just got so many feels from this book and organising them neatly is just not happening. XD

In this book a year has passed since the first book. Levi, Blue, and Tom are heading to a big manor on the moors for a spooky few days. Blue is eager, Tom and Levi are just tagging along because they know things may get hairy and that Blue may need help. It is a good call btw, given all that happens in this book. Then again… maybe it would have been better had Levi or Tom not tagged along.

The house was properly scary and not just because of the eccentric viscount who got all the gruesome stuff in his home (death masks and gallow beds….), but also because of the vibe. Despite not being in the house, just reading the story, I could feel something dark lurking and I was curious what kind of secrets and ghosts this manor would hold. And if they were all bad or some also good. As the story continues we learn more about the house and the viscount’s family. But the house wasn’t the only thing that was creepy. There is also a ruined abbey, a cave system, and spooky grounds. Yep. All the ingredients are her! And it was a delight to read. Scary and goosebump inducing. Love it!

I also loved figuring out the viscount’s motivations, because he got his reasons for doing what he is doing and it may not just be for what we first learn.

The only thing I wasn’t such a fan off was the constant worrying between the characters. There was some of that in the previous book, but that fitted. Their relationship was still starting, they weren’t together yet, they didn’t have a strong base. Now it is a year later.. Instead of just having a good strong talk about things, they keep their thoughts mostly hidden only to burst out when the time isn’t that right. I was just frustrated with it. I get that there are insecurities, but really? It was just as if a year didn’t pass. Especially Blue got a tad too much. Again, he has had a crummy past, but didn’t Levi prove in this past year that he cares about Blue? That he really won’t just leave him? That he is just protective? And so on. At times I just wanted to grab these two, tie them up, and lock them in a closet for them to FREAKING TALK ALREADY.

But there were enough moments that were cute, fluffy, and fun. Though… I have to agree with Tom, at times it was a bit too much. Haha, Blue was just like a kid in a candy shop, or the guy from Lego Masters from past week (27/3) who just couldn’t keep anything a secret and just kept spilling everything. Blue kept blurting out everything. It was cute and I was happy that he was happy with his relationship with Levi, the first one in forever, and he does remind me of myself (though only a bit) but I can imagine that people around him got a bit annoyed with it or would prefer something else for a change.

I also loved the banter between the characters and laughed plenty of times. Just like with the first book. I am glad there were funny moments because it gave you a moment of air. A moment to relax and just giggle.

There are also some hot sex scenes. Yep, in between murderous ghosts, handprints on shoulders, and rooms getting flipped over by competition (if you want to call them that), they had some steamy hot sex! I really loved those scenes and I was happy that they were able to find a happy place inside this scary place.

We also meet people from Blue’s past and learn more about Tom and his past. We meet Declan, Blue’s estranged father. I am still not sure how I feel about that guy. On the one hand he showed he really cares about Blue… on the other side.. he was just a dick. I have to say I warmed up to him as the story continued. I hope that he will come back in the next stories. Or that Blue at least gets in contact with him. An other guy from the past is Spud. Yep, that worthless conartist who abused Blue (that is what I would call it). He and Fay (urgh) are also in the competition/the manor and the tension is real. I loved that Levi and Blue formed a front and weren’t afraid to say their mind, much to amusement of the other guests. And Tom’s past and learning more about this old man, I loved that as he is such an important character for the book and for Blue.

The ending. WOW WOW OW WOW. I thought the ending to the previous book was good and exciting and OMG spooky, but this one definitely goes up a notch and I loved it all. It got really harrowing and even scary. Would everyone make it out?

Like the previous book, this one had an epilogue. Christmas is finally being celebrated and I was so delighted to see everyone there. I hope Blue & Levi have many more Christmasses together.

I cannot wait for the next book. I want more. I would also recommend this book to all loving LGBT romance and ghost/haunted house stories.

Just like the previous book, here are some of my favourite quotes:

“So, did you really find body parts in jars in your house? Were they dripping blood?” a young, dark-haired bloke asks with grisly relish.
I smile. “SO many body parts and blood everywhere,” I say dramatically and not particularly truthfully. “It was like a Tesco for serial killers down there.”

Levi tightens his hands on the wheel and stares through the windscreen. “It’s coming off the moors.”
“Well, I must congratulate the moors for adding the extra spooky element that we never knew we needed. Very appropriate for an approach to a haunted house. What’s next? Boris Karloff driving a tractor?”

“I did go to confession.” Tom rolls his eyes. “A fact you’d know if you asked pertinent questions. You should display interest in something beyond the contents of your boyfriend’s trousers.”

A knock on the door sounds, and we sit up as it opens to reveal a disgruntled looking Tom. “Bloody place,” he says grumpily. “There’s a poltergeist in my bathroom. If I’d wanted someone to throw things at me, I’d have stayed at home and been rude to one of the customers.”

Another book flies over our heads and hits the wall behind Spud.
“Do you want to harm us?” Victor says. “Tap once for yes and twice for no.”
“He’s throwing books at us,” I murmur. “I’d say he’s got his hands full at the moment.”