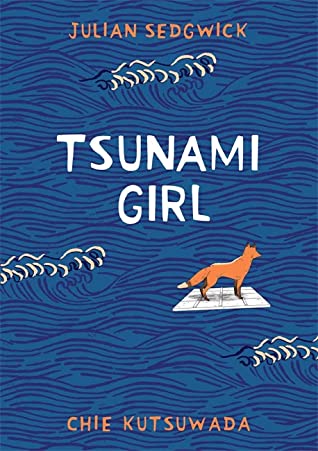 A beautiful heartbreaking book about the tsunami in 2011. When everything went so terribly wrong.

So I got tons of emotions over this book, so I am sorry if it is a bit messy! I tried my best to get my words right, so I hope I did.

Meet Yuuki, a girl from England but her heart and family belongs in Japan. She goes on a trip to her grandfather to get away from everything. I liked Yuuki from the start, and could also understand that she wanted to get away. She has terrible panic attacks and other things and her parents (especially the mum) don’t seem to get it. Don’t seem to understand. She goes to Japan to be with her grandfather for a while and I just loved that she had that opportunity. That she had that chance. Then again, given all that happens in the book… maybe she would rather have stayed at home.

Given that the day after arriving a big earthquake (which was vividly written in a way that I could see it happen) hits the town and its followed by a giant tsunami that rages over the land (my heart was beating in my chest reading about how the water in the sea disappeared, how the school was hit, how everything went so wrong in just mere minutes). My heart just broke for everyone there. For everyone who survived. For those who weren’t able to escape. To families ripped apart. To radiation hitting towns (really building that stuff so close to people was just the dumbest thing ever, you would think that people have learned from Chernobyl, but I guess not). Houses gone. Everything. We see in bits and pieces how Yuuki survived, what happened in that moment, and how she got to safety. And then followed by her time in England while very strongly wanting to go back to Japan. Which I can imagine as she didn’t get to have closure.

I would have liked to see more of grandfather. Now we get just a small bit with him, we find out a few things here and there, but before we truly see more of him, get to know him more, the earthquake hits and the tsunami explodes over the land. I get that because of what grandpa had for Yuuki and it wouldn’t have worked with later parts then, but still I would have liked at least a day more. Maybe two. And not just because of grandpa, but also because I wanted to see more of the little town.

I am still not sure what to think of Taka and Yuuki’s relationship. We don’t see much of him in the earlier parts of the book, we see some flirting, some talking, but we don’t see him until afterwards, until Yuuki revisits the town. And in those later parts it just felt mostly like a brother/sister relationship with some dashes of confused jealousy. Given that Taka is a pretty big part of the story in the later parts I would have liked to have things a bit more clearer.

I loved the Japanese words dotted throughout the story, and I loved reading the descriptions of various places but also the folklore. The yurei, the rituals, Obon, and others.

The manga parts were great, they were a bit of fantasy mixed with seriousness and I loved how they popped up in the story. And yes, at times they made me cry (especially when we see grandpa and Half Wave together and grandpa not being ready to move on). There was one thing that was a tad odd, the story keeps talking about Yuuki having one plait, but in the manga parts she clearly has two of them.

The ending made me very happy. It was a sweet way to end things.

All in all, if you are in for an emotional read be sure to check out this gorgeous book.