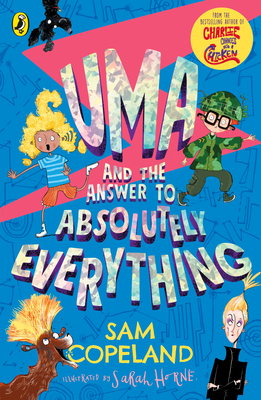 “Athena, What’s the Quickest Way to put Out an Eyebrow Fire?” This and many other questions come by in this hilarious and delightful book! Sam Copeland and Sarah Horne have done it again!

I just love the Charlies Changes series and I am delighted that Sam Copeland has something new for us. Not about a boy changing into animals (but not the ones mentioned in the title, argh), but about a girl finding an earpiece with a smart AI and getting answers and getting back her father.

Summer has started for Uma, but little does she know that it will be a summer to never forget. She finds an earpiece with an AI named Athena, she must save her home and her town which is being threatened by a big corporation (featuring a big bad villain who doesn’t seem to shy away from pulling guns on kids). Along the way there is kidnapping of alpacas, talking to alpacas, wondering why alpaca puke smells so badly, and more. There never is a dull moment, instead I just flew through the book. I just couldn’t put it down. Uma and Athena were such wonderful characters and I could relate to Uma and her endless questions. I wouldn’t mind an AI that would be able to answer everything (though respecting privacy would have been nice). I loved the plans that were made and was rooting for the characters to save their home.

The book isn’t just a hahaha hilarious book, it isn’t just exiting, but it also features loss and mourning. Uma lost her mom a few years back and her dad has stopped talking (and seemingly also caring well for his daughter). Uma is alone. Uma wants her dad back. She wants music in her life. Words. Sentences. I just wanted to reach out a few times in the story to hug her. Because she could use that. I am happy that she had Alan Alan and also Athena as they both brought some happiness to this girl. It was really well-written. I loved that Athena thought of plans to help out Uma. Though maybe electrocuting someone on their train rails is not the way. XD

I am not sure how I felt about Alan Alan. I mean, on the one hand he was a great character and he is funny, but on the other hand I am just not a fan of characters who constantly lie. Who run away when danger happens but leave their friend and when said friend says something about it act huffy. So he was a mixed bag for me. In the end I do have to say he was a pretty good friends and really cared about Uma. We also see that he grows up a bit more as the story comes along which made me smile.

I wasn’t a fan of the bullies. They were a horrible bunch. I do hope that what Alan Alan did has taught them a very good lesson. Hehehe.

The chapter titles were absolutely brilliant and had me laughing quite a lot. OK, there were a couple of questions that had me feeling sad, but most had me in stitches (and my husband as well as I told him a couple).

I also love the footnotes that seem to be a standard in Sam Copeland’s book. This time though it is the MC’s footnotes and not, like in Charlie Changes series the author. I really loved the footnotes, but I am also glad that they weren’t too abundant as they do distract me from the story.

The illustrations? Fantastic. I just love her style and they fit so well with the silliness of the stories that Sam Copeland writes.

All in all, a fantastic book that will make you laugh and cry as well. I hope that Sam Copeland writes many more books like this because I want more. I would recommend this one to everyone who loves asking questions, wants to read about alpacas, and loves crazy plans for things.