Welcome all! flails Welcome to my tour stop on the Blog Tour for The Ones We’re Meant to Find by Joan He! I am SO hyped to be part, I still need to read the book but it is high on my list. So I am happy I can promote this book to all!

For today’s post I got an excerpt, a giveaway (open INT), and book/author information~

Are you ready to find out more about this book? Then let’s get started! 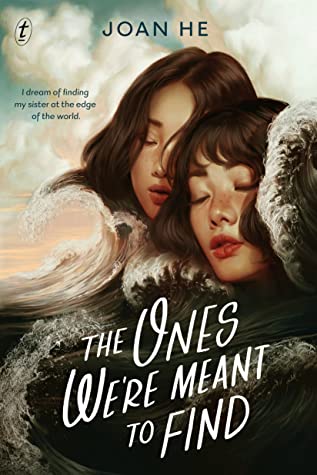 Perfect for fans of Rick Yancey and Marie Lu, The Ones We’re Meant to Find is a sci-fi fantasy with mind-blowing twists, ready to burst onto the YA scene, from the critically-acclaimed Descendant of the Crane author, Joan He.
Cee awoke on an abandoned island three years ago. With no idea of how she was marooned, she only has a rickety house, an old android, and a single memory: she has a sister, and Cee needs to find her.
STEM prodigy Kasey wants escape from the science and home she once trusted. The Metropolis—Earth’s last unpolluted place—is meant to be sanctuary for those commited to planetary protection, but it’s populated by people willing to do anything for refuge, even lie. Now, she’ll have to decide if she’s ready to use science to help humanity, even though it failed the people who mattered most. 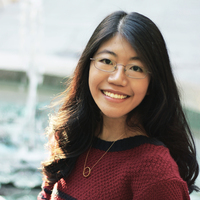 Joan was born and raised in Philadelphia but still will, on occasion, lose her way. At a young age, she received classical instruction in oil painting before discovering that stories were her favorite kind of art. She studied psychology and Chinese history at the University of Pennsylvania and currently writes from a desk overlooking the city
waterfront. Descendant of the Crane is her young adult debut.
For updates, please sign up for her newsletter: http://eepurl.com/c5rvdL. For business related inquiries, please contact her literary agent, John Cusick of Folio Lit.

What would a normal person feel, potentially moments
from reuniting with their sister? Excited, most likely. Nervous
would also be acceptable. Not scared, which was Kasey’s physiological
response of choice, epinephrine charting on her biomonitor.
She wanted to run. Quelling the urge, she knocked
and, when no one answered, bypassed the retinal scanner with
her badge.
Possibility. Probability. The chances were next to none.
She pushed open the door.
And breathed out.
No Celia.
She ran a body heat scan. Negative. She walked in, looking
for evidence of how this person by the name of “Act”
might give anyone the creeps. Maybe she wasn’t the best
judge; she hardly put people at ease herself. But truly, this
unit was the most mundane thing Kasey had encountered
so far: boxlike, walls painted gray. Fuel-bar?
Check. No bed;
not unusual. The stasis pod, bolted upright to the back wall,
could have doubled as one.
A more thorough inspection led Kasey to the fuel-bar.
The cupboards yielded tins of protein blocks, vitamin cubes,
and fiber powders. She studied the stasis pod. An older
model, worse for wear and missing chunks of material on its
right side.
A lot of chunks, actually, gouged out at fairly regular intervals.
Intervals like the rungs to a ladder.
It was a stretch of the mind—a
biased mind, familiar with
58 • JOAN HE
ladders and primed to detect their patterns. Besides, what ladder
went to the bare ceiling? Good question: Kasey looked up.
The ceiling was painted the same gray as the walls. Nothing
about it stood out.
Except for a speck. A paint bubble. A bead-like
object, either
attached by adhesive . . .
. . . or resting there, just like Kasey rested on the ground
thanks to gravity.
To assume antigravity was at work in a down-stratum
rental unit was an even further stretch of the mind than seeing
ladders on the sides of stasis pods. The probability was
absurdly low.
But Kasey was only here to rule out the near impossible.
She positioned herself under the speck, opened the search
warrant app in her Intraface, and keyed CANCEL ALL ACTIVE
FORCES into the unit override system.
For a second, nothing happened.
The bead fell.
She caught it in her cupped hands, like a raindrop from
the skies. It was nothing so natural. The white kernel, no bigger
than a tooth, possessed a smooth, machine-tumbled
shape,
and when Kasey nudged it onto its narrower side, she found a
row of micro-lasered
digits.
She could have magnified the numbers through her Intraface
and matched them to the fourteen-digit
sequence she’d
memorized, given to authorities, and entered into her own
geolocation tracker. She could have; she did not. She knew,
intuitively, what this thing was. To whom it’d belonged.
THE ONES WE’RE MEANT TO FIND • 59
Where it’d once resided: under the skin, at the base of the
skull.
Might your sister not want to be found?