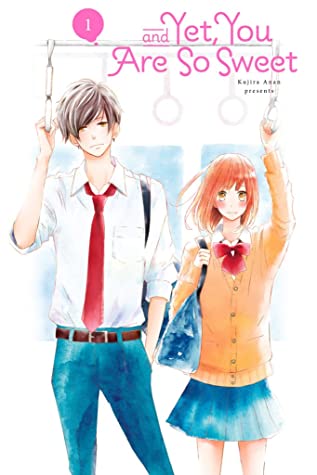 Our MC has a boy she is crushing on, she finally confesses and he rudely rejects her (and even makes fun of her online). She has a big big heartbreak, but there is Chigira-san, mister popular and mister sports. I really was thinking he was going to be a dick to her, but instead he comforts her, and later in the first chapter he proposes something. Why doesn’t she develop one-sided feelings for him! Of course, pretend! I found it such a cute proposal, but I was immediately suspicious. What is the catch? Does he already like her that he is proposing this? Something else? As the story goes on we see that Kisaragi is doing all she can to act on those one-sided feelings, and the plan seems to be working (well after she has gotten a rundown on his schedule, haha, she kept missing him), but that leads to a new problem…. what happens when those feelings become real and turn into a full on crush including blushing and hoping for more? I had a giggle at her confused emotions. She was so ready to do x but then the feels really hit.

Kisaragi was a sweet character, but she had some low self-esteem. At times her remarks were quite painful, like how she keeps saying that Chigira is out of her league. He came to you girl, so clearly you aren’t.

Oh, and when that dickhead of a crush posted that on Twitter, I had flashbacks to when I confessed to a boy in school. I gave him a letter to ask him to date me, that I liked him.. the next day that letter was hanging in the school’s cafeteria. Maybe not the same, but back then Twitter wasn’t around, but I am sure that dick would have posted it there if it had existed. So I just wanted to reach out to our MC and give her a big BIG hug.

I think the only thing that could make it better would be seeing Chigira’s POV. We do get some glimpses, but I would love a full chapter, or even half a chapter. While it is pretty clear from Kisaragi’s POV how Chigira feels, I still want more!

The art was so pretty! The mangaka can draw so nice and I just love the eyes.

All in all, I need more. I need to know if this is going to be one-sided (HA, don’t believe that) or if Kisaragi finally steps up and tries to make more of it. I mean, these two look so good and cute together and there is so much chemistry. I want them to date!