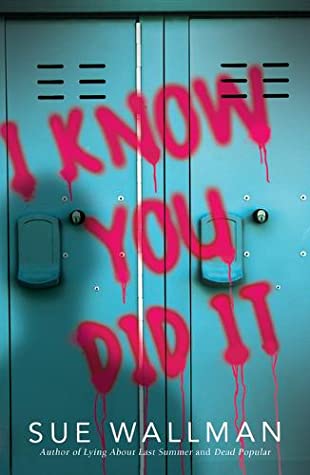 A girl, a secret, a new school… and murder! This was a really great thriller and I enjoyed it a lot!

I am always on the lookout for a new YA thriller to read and when I saw this one I knew I had to pre-order it and read it. I flew through the book, it was just so good that I didn’t want to stop reading.

Meet Ruby, a girl who, when she was small made a wrong mistake and that haunts her for all time. She is now at a new school and we see that things are OK in the beginning (well, except that annoying clique featuring Monique and Isaac), but quite soon things spiral down and the past is dug up again. We see all that happens and it is A LOT. But really, you aren’t prepared for happens next, and that is murder. I found Ruby a great MC, and I really felt for her. At times I just wanted to reach out to her and give her a big hug. Because she could use that. So much happens in her life and it was just too much.

I wasn’t always agreeing with how Ruby solved situations. I mean, if people already think you are a bad egg, maybe don’t use violence back? I mean, in some cases self-defence, but in some part it was just over the top. And that also made me wonder if Ruby was truly so innocent as she said she was.

The murders? Well, while they were shocking, I don’t know it also missed something as we are never near when they happen. We just hear that x person has died. I also had expected more murder given the blurb. That is all I will say. While I found it heartbreaking for Ruby that people point fingers to her as she was near those people before they went, I did think it was well-written how the murderer made sure that Ruby was nearby, that the cameras weren’t working, and others. I mean, dang. That is some next level

What happened when Ruby was younger? It was horrible, and so sad. BUT, I also couldn’t see why everyone was so hurtful towards Ruby. I mean, yes, she caused the death of a kid and that is HORRIBLE. But she was also barely 4 years old. She made a mistake. She did something that she shouldn’t have, but it was an accident. It was just heartbreaking to see how she feels constantly guilty. Is constantly afraid someone may find out and that the pain and hurt will start. People will hate her. I mean, that is just no life. At times it just seems too much in my eyes, and throughout the book I kept also waiting for that twist, because given how people reacted each time it just felt like there was more to the story than that Ruby told us.

I wasn’t a fan of Ruby’s sister. She constantly kept calling/constantly texting. And one time, well I just wanted to shake her. Ruby is having a hard time at school and her mom helps her out a lot, which is normal if you kid is 15-year old. Instead of being supportive the sister tells Ruby to not do things because their mom has troubles at work for all the free time she has to take due to Ruby. WTF? Your sister is bullied at school, things are going WAY wrong, and you say that? I mean really? If it was for something silly, sure, but this is serious, and it seemed like the sister didn’t give a damn.

The romance that is in this book? I loved it. It gave some light-hearted moments to the book and I was happy for those reprieves. I was definitely shipping the two together and hoped that they would get dating.

The ending was OH BOY OH BOY OH BOY, and I really loved it. It was exciting and a perfect ending to this story. I do hope that in the future people are a bit kinder to Ruby. Less judgmental over a mistake she made years and years ago. I would highly recommend this fast-paced and exciting read to all.