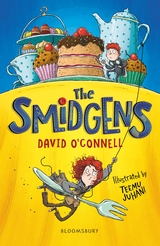 I ABSOLUTELY LOVE the The Dundoodle Mysteries Series and so I was very hyped to see a new series by Daniel O’Connell pop up! This time about tiny little humans, named Smidgens, living in homes/places.

We meet Gafferty, a tiny Smidgen who is very curious about the rest of the world, and what happened to the other Smidgens. She has to take care of her brother a lot, learn him all the skills he needs to survive in a big human world. She is not happy about that, and I could imagine. Haha, her brother was just a tad frustrating to me. I get he is much younger, but there are just times that you got to act right, especially when humans are around. I really liked Gafferty though, and found her very tough and awesome. She is not giving up, she is willing to do some scary things to save her family, find out about Smidgens, and more. This girl is adventurous and I can see her have a ton of adventures in her life.

There is also a big bad villain. I wasn’t a fan of her, but haha, I guess we are supposed to not be a fan of her. She is a thief who now is going after some more rare items than normally. In this book she is looking for a mirror, and well, the Smidgens are just the ones to know what is up with that. She really goes very far, though at times I also found her a bit lazy as she kept relying on those ghosts in the bottles around her neck.

The adventures were ton of fun and I loved learning more and meeting other characters (including some other Smidgens). There are many exciting and WOW moments. At times I just wanted to close the book just to have a moment to breathe! I loved the scenes in the toy shop. OH BOY, I want to be tiny as well and just have fun driving the train, jumping into a pile of plushies, play with things that are normally too small for me (like a doll house).

There is still a lot of things that could be said and done. I mean, what happened in that war? Why are the Smidgens broken up like this? Are there more Smidgen families outside of this town? Will we see them? What happens in the next book, because that mirror thing is still a big thing.

However, the ending, it just felt a bit out of nowhere. One moment we were having exciting battles (really, so exciting) and the next Gafferty is back at home. It just felt really disconnected and I would have liked to see just a bit more. And not just get an explanation later from one of the characters.

The art was just such a delight, I love the style. It was cute, adventurous, and magical.

All in all, I am excited for this new series and I want more. I need to know what happens next not just with the mirror, but with other parts. Because there is still a lot of things left unsaid. I would recommend this one to everyone.