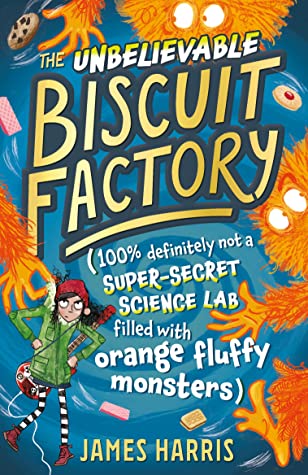 A delightful and fun story about a girl living in Normalton where things aren’t so normal. There is a biscuit factory nearby and well the things that is coming out of that place ain’t biscuits. Oh no. More like dimensions being broken, doors that should have stayed close opened, and more. Daily craziness happens to the point that people just tend to ignore it or just shrug it off. I guess I would have done the same, though I think I still lean more towards our MC and that she is seeing it all! In this book things go terribly wrong (and not just Haddie’s music) when doors pop up all over town and dimensions may crash! I absolutely loved this bonkers story and I had tons of fun seeing Haddie find her guitar, dodge monsters, and oh yeah, try to save the world.

Our MC is a bit bossy at times, BUT it wasn’t too much. It didn’t even stand out too much until someone mentioned it, then I thought back and indeed I could see that she was bossy. For most though this girl is super. I mean, she is the the only one who can resist the whole Biscuit Factory and their whole you don’t see anything stuff. She is not impressed with buses with music and anime and sweets. She kicks some serious butt, is not afraid to go to heights to get what she wants, and she is willing to improve herself and say sorry when she finds out that she may have gone a tad too far at times.

I wasn’t sure how to feel about Man Man, he was just a tad too aggressive for me. But I did like that he was a rabbit and that there were apparently other rabbits (including one I had totally not expected to be a rabbit, but that was a great surprise).

The orange monsters were hilarious though! I mean, I had expected them to be a bit more dangerous, but all these monsters do is be fluffy, annoy people by sitting on them, dance, and make some random comments. This was much better! Much funnier!

I loved the biccypedia entries, though I did feel sad that at one point in the story they disappeared! I was looking forward to them each chapter and now they were gone for a while. I also loved the name tags and what they said. Not just the names of the person wearing it, but also their cookie expertise (well, given that the biscuit factory doesn’t make biscuits, can we really call it expertise? Haha). There are also notifications from Haddie and plenty more fourth wall breaking that I absolutely loved.

The ending was just the best! I really liked it, it fitted perfectly with the story and completed it.

I think the only thing that would have made the book even more awesome (can you imagine that), would be if there were actual illustrations in the book. We do get some small bits here and there, mostly chapter headers. But I want more! I mean the cover and the headers are so much fun.

All in all, I loved this book and truly flew through the book in one go. I just had to keep on reading! I would highly recommend this hilarious, not so much biscuits but tons of saving the world and monsters and dimensions, book to everyone.