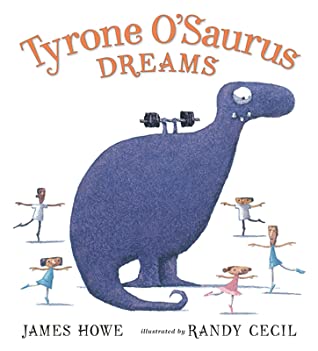 And it all began with a dream~ Meet Tyrone, a big dinosaur who just wants to dance!

5 years ago I read Brontorina and I absolutely loved it, laughed so much seeing a big giant dinosaur try to make a career in dancing. So I was very hyped and excited when I saw there was a follow up, this time with another dinosaur, but also with dancing dreams.

I loved this one from the beginning. Seeing Tyrone find his dream, and then see if he would follow it or not. I mean, his family is the typical family many of us have, ones who want us to follow in their footsteps. In this case Tyrone even has three pair of footsteps (or dinosteps at least, haha). His father who wants him to be a dentist (I was also no thank-youing for that), his mother wants him to be a lawyer (yes, to all the books, but I agreed with him on the rest), and then there is his brother who does sports. I was happy he at least gave his brother a chance.

I was already wondering if we would see Brontorina, and we do! I love seeing her again and I love that she is still dancing and working hard on her skills!

The meeting with Brontorina brought the story to the right track, the one where Tyrone would be able to get to do his dream. I don’t see this as a spoiler as it is pretty clear from these books that the dreams get fulfilled in one way or another. I was also very happy with his family’s reaction to him dancing, I was a bit worried about the parents.

Haha, btw, I was happy that the dance teacher decided to teach the class outside, I would do the same if I had a big couple of dinosaurs (and we know what happened in Brontorina’s book, haha).

I really love the art in this one, it is so playful and fun!

All in all, bring us more books like this. I love dancing and dinosaurs, so this is just the best. I would recommend it to all. Dinosaur lovers, dancing stars, but also people who have dreams.