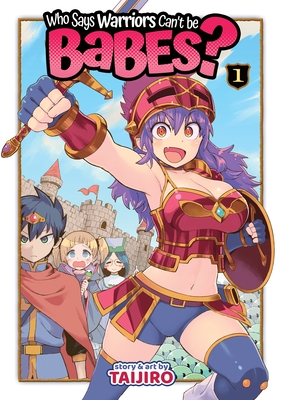 A hilarious and silly manga about a Warrior Woman who wants to be notice by the hero…. cue a lot of hilarious situations as she tries EVERYTHING.

I have had my eyes on this manga for some time and finally I had the chance to read this one and boy I laughed so much. This was just too funny!

Meet our Warrior Woman, once she fell in love with a boy and decided to become superstrong, but now she wishes she wasn’t that strong… because her crush doesn’t notice her anymore. And even more rudely, doesn’t see her as a girl. Yep. But does she give up? OH no, this girl keeps trying and trying and trying. I really loved her character, and I had a laugh at all her tries (though please no more make-up, haha), though I would also like her to accept who she is. You don’t need to be ultra feminine to get a guy.

And she tries all sorts of things. From raiding a thieves cave and try to get a special fancy dress that is sure to woo the men (with a fun fashion show) to making “food”. Yes, I say “food” as I am not sure what it is, but I think even the mom in Clannad makes better bread. And that says a lot.

Along the way… the hero dies quite a bit. Yep. She tries to be so affectionate or more feminine that she kills him. Though sometimes he makes a remark or did something stupid and our girl forgets her own strength. Either way, the priest has to help the hero quite a bit. XD

I loved the quests and seeing the monsters/the villains they are defeating. At times I did feel sorry for them as the warrior woman is a bit OK A LOT overpowered. I mostly felt sorry for the demon princess (or whatever she was) near the end of the volume, oh girl you interrupted something, RIP you. And I loved the reactions of the villains/monsters when they found out that you shouldn’t piss off a warrior woman. Teehee.

I did think it was very harmful/rude/harsh that the hero and other characters (but thankfully not the mage/priest) saw our warrior woman as a boy/man. Just because of how she looks/how strong she is/how buff she is. That is just NOPE in my eyes. I mean the hero is even so stupid/dumb/rude that he pops in when she is changing. Or when he comes out of the men room and she walks by thinks she also needs to use the toilet. And there are other instances and frankly, I just wanted to kick the hero to the street. And wish our girl would see that this guy is all glam and glittery but has no brain left. She should find someone who likes her for who she is.

I love that instead of chapters we have levels!

I wouldn’t mind learning more about the priest or the mage. I mean I definitely didn’t expect THAT of the priest when the warrior woman and mage had that conversation.

The art was really pretty and I love the character designs. I am also glad that the mangaka went with the outfit that the warrior woman wears in this one, though I also don’t mind some parts with her new outfit. 😛

All in all, a hilarious manga that made me laugh so many times. I will keep on reading!