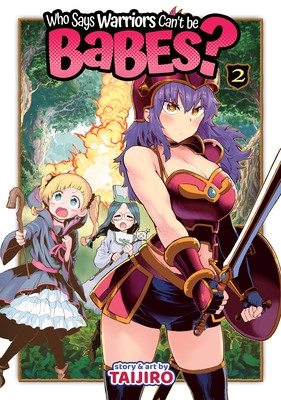 Warrior Woman is back and this time she deals with more demons, spas, and elf girls who are interested in the hero.

I just had to continue this series after the hilarious first volume, it is just too good! Too funny! You just want to root for this girl! Hope that he hero sees beyond her muscles and sees the girl underneath.

There is plenty of happening here in this volume, first up we have two chapters from the POV of the demon girl from the previous volume, who has a “smart” plan but she clearly doesn’t know what bad plan it is. I laughed so hard at this one. Especially how it ended. The next chapter is the mage. She and Warrior woman are lost and what happens next just had me in stitches. Mage is so much smarter while warrior woman is just hungry and in need for food, and believe me… you don’t want to stand between food and warrior woman.

After that another 5-chapter story in which a mean elf girl finds out that you shouldn’t try to woo the hero because warrior woman wants him. I just LAUGHED so much at this part of the manga as it was just so over the top, so silly, and oh so weird. I snorted many times as well. Priest has some coughs interesting ideas to help warrior woman.

And lastly, what would a manga be without a hot springs chapter (or episode). Well, here you are! I knew what priest was up to, come on we have seen what has happened in an earlier volume… so um, I wasn’t surprised. 😛

And then we have some more other fun stuff happening and bonus manga that broke the fourth wall for a bit.

And did the warrior woman woo her man? Um. No. But she did try. Haha. Oh she tried. And he did notice her, so I guess it is better… but eh, not in the way anyone would want to be looked at by their crush. At times I just wanted to punch him, I am sorry. But that dude is just way too obvious, and it is just hurtful how he never sees her as a girl.

Then again, I found it pretty harmful how people kept remarking on her weight, or how much muscles she has, or some other things. Yes, she is buff. Hello, she is a warrior. You don’t get to be a warrior without some strength and muscles.

The art is so much fun! I love the style and I love how silly and exaggerated it was.

One volume left, and I will be sad when I finish it, because it is the last one. I am kind of curious how thing will end and if some conclusion happens. It would take a freaking miracle though, or maybe a love potion (gone right this time).