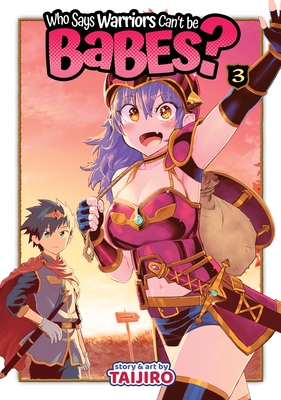 The final volume and the quest is coming to an end! What will happen to our party? Will our Warrior Woman be able to get the Hero to notice her?

In this one our Warrior Woman keeps on trying to get the love of her life to notice her. From mingling with other guys to make him jealous to knitting him something warm and fluffy, this girl is ready to do anything. And I loved it! But I did feel sad that after so many levels (chapters) he didn’t seem to get it. Haha, I mean how dense is this guy? Here is a girl who is so sweet to him, makes time for him, makes him things (OK, never again the food), but he just sees her  as a friend, and a male one at that. I would have liked to see more hints that he saw her as more. He did seem to care for her though, but is that love or not?

Next to that the quests continue for our Hero party. We see them find cursed rings (which of course our Warrior Woman saw as a proposal, oh girl), mirrors, and more. There are tons of hilarious moments that had me totally in stitches. The facial expressions definitely made it all even funnier, and the way Warrior Woman is so overprotective is both deadly but also hilarious as she goes very far. Don’t touch her Hero. She tries new fashion (and I wondered why the hell she fell for that or why she liked it that much), I loved the idol arc that was just amazing. She makes a good idol, though please no more handshakes and singing (though I guess a new superpower was discovered, much to the chagrin of our Warrior Woman in the end). There is a ton happening and I really had fun reading. I was curious what the next part would have and how hard it would make me laugh.

BUT, the ending. It ruined it for me. It just came totally out of nowhere and it just felt rushed and hurried. I mean, I am happy that x happened, but I had loved to see it more naturally, plus also seen change in the Hero, given everything we have been through in the past 3 volumes it just didn’t make sense, especially since the Priest/Mage had to explain things to him. Now it felt like the author had a deadline and just rushed to give it a happy ending. I feel that while the quest had a time, the journey was coming to an end, that things could have been solved better. Maybe they could have done some more quests together and that way she could have shown her feelings then. Not just BOOM out of nowhere and BOOM done. The epilogue was cute though, but again, while it made me happy I was also very mixed about it. So yeah, instead of the constant 5 stars I have been giving for the other two volumes this one gets a 4 star.

All in all, I did love reading this series and I am sad it just had 3 volumes. Maybe we can have a spin-off? Or a sequel? I would love that.