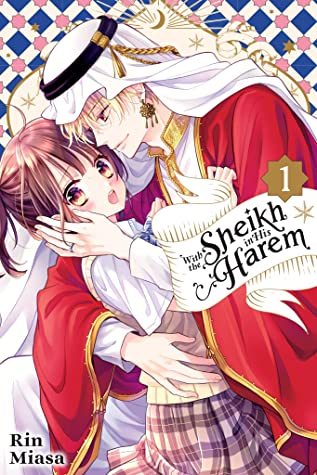 A cute and fun desert romance which at times had me reminded of Ouran High School Host Club. Yep, really. I mean, the sheikh is just 100% Tamaki. Impulsive, likes to spoil the girl he loves, is silly, but also serious at times if he needs to be that, protective. And oh yes, a typical thing I would see Tamaki do is make sure that someone stays with him. Sanagi has told him that she will stay with him until she has paid off her debt (sounds familiar, right), well our prince is making sure of that by adding some extra costs. Yes, it may sounds a bit much, but given how much he is like Tamaki he just hasn’t found another way. I do hope that he finds another way in the next volumes.
And Sanagi, with her money-savvy-ness and her strictness and her down to earthness is so Haruhi (plus also because of some other things).

There were some things I wasn’t sure off. I mean, the proposal was cute, but I found the prince a bit forceful (and also how he just bought the school). The fact that no one got the girl some normal clothes that weren’t too expensive. Throughout the volume Sanagi just wanders around in her school uniform and sleeps in a gym outfit. It just stood out and made things very weird. I also thought it was slightly rude of Sanagi to not even do one ounce of an effort to learn the language, instead fully relying on a translator system. I mean, if I was whisked off my feet to a Middle East desert place, I would definitely try to at least learn a handful of words and maybe even more. Because what if, and that does happen in this volume, your translator disappears? You need to make sense. You need to know what HELP is.

We also see that the Queen and the crown prince aren’t all that nice (or well, at least the Queen is a bitch). I am kind of curious about that and I am sure we will see more of it in the upcoming volumes. I hope that our prince can stand up and do something about the queen.

There were some cute moments, and I am happy that the prince respects Sanagi’s boundaries. Instead of having a wedding night as one often does, they play card games. He does hug her at times, but nothing too much. I do hope that the romance does spark between the two, as I do think they would make a good pair.

Oh, and I hope that Sanagi’s strictness will tame the prince a bit, at least in regards to how he throws around his money. I hope she learns him some responsibilities and get him to be a bit more mature and fitting for the prince role.

The art was really fun, though I was surprised when the prince turned out 17 (I thought at least 19) and Sanagi is in high school… but looks just a tad younger for some of the manga parts.

All in all, I definitely want more of this one.

2 thoughts on “Review for With the Sheikh in His Harem, Vol. 1”