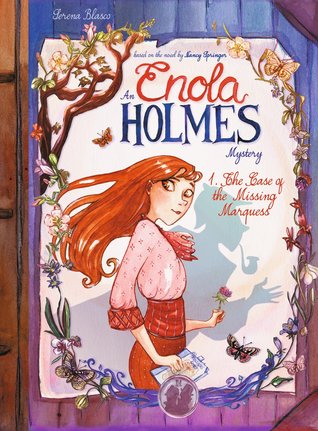 Enola Holmes returns! This time her books are converted to comics, and I am there for it!

I really liked the original series so imagine my delight when I browsed one of my libraries and came across the comic versions of it, in Dutch, but I don’t mind given that the original seems to be French, haha. It’s been a while since I read the original series and I was excited to give these a try. Hopefully the next time I visit I can bring the second volume with me.

In this book we meet Enola Holmes. Yep, Holmes. Her brothers are Mycroft (horrible) and Sherlock (not so horrible but still stuck with opinions of that time). When her mother disappears she sends them a telegram to let them know. I wasn’t charmed by either of them, but out of the two Sherlock at least wasn’t that horrible. Yes, he is a man of that time, so he thinks girls should wear dresses and not do dangerous things and blablabla, but he is more caring and open to his sister.

I love Enola and loved the books she read, the things her mom learned her (not your average things, more like all the awesome stuff). She is not a girl like most girls in this world. She wants to just be outside, solve mysteries, read about feminism, learn about code, and more. Corsets, no freaking thank you (and I agree, those things they had in this time are deathtraps). We see that Enola is NOT happy with her brothers, and I loved that she was solving codes right under their noses and then also decide to just say screw this and run away. Yep. Go girl! I would have done the same if I was Enola.

From then an adventure and a mystery starts and Enola was just so awesome. I was just rooting for this girl.

While the pacing was pretty decent, there were one or two moments I was a tad confused, I do have to wonder HOW much was lost in the making of this comic? It has been at least 5 years since I last read the books, so I don’t know a lot of the details any more. I don’t even have the books anymore as I was making room and 4 starred books left the building. But the normal books are around 200-220 pages. These comics are 64 pages. I thought that maybe there would be like 2 or 3 of them for one book, but I just checked Goodreads and the next volume in this series is also for the next book! I am kind of curious what is missing, but I just have no way of getting the books. Haha, I guess I will just be left wondering about it. Maybe someone else who recently read the series knows.

But, while I am confused how they crammed so much in such a little comic, I did think it was a good comic. As I said, tons of adventure, a kick-ass MC who isn’t afraid, who is going to make her own way and no boarding school will come in between. The art was also fantastic, the style was quite pretty! All in all, I am definitely going to continue reading this one. Hoping though that not too much gets lost in the making of the comic.