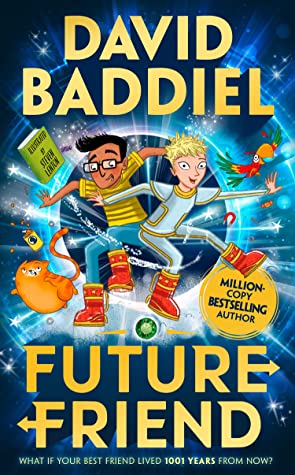 Rahul is back again, and this time he has a new friend and new mission! Will he gets his creativity back in time?

David Baddiel is one of those authors that write some amazing books and that I look forward to each time. I squee in happiness each time I find a new book!

I was so happy that we are back with Rahul. Sure, on the one hand I would have liked another character, but seeing Rahul again also made me happy. I was sad though that his friend is now mostly in Scotland and that his invention drive has gone. I was rooting for him to find it again, because he always has some fun ideas, I mean hello, beanbag pants? SIGN ME UP! I love bean bags and this sounds fabulous. It was fun seeing him get his drive back and see him befriend with Pip.

Pip was quite an interesting character, but sometimes I wondered about her IQ. I mean, hello, Rahul is trying to make sure you stay in disguise and don’t stand out and what do you do? Talk to dogs, because in your time they have liberated themselves. Use your gravityless boots at the worst time. I could go on. She could have at least tried a bit harder to fall back in the crowd. But I did like her and I was hoping she could defeat her clone and get back to the future, back to 3020. I definitely loved hairdo, and I want such a suit, because some days I am just too tired and this would make changing clothes easier, just image what you want to wear and done.

The pets? I am generally not a fan of talking/smart pets, but in this case they were pretty OK and weren’t too annoying.

Rahul’s parents, haha, oh my those two are great! I love how they support Rahul, but also make sure he keeps his daily routine.

The last part was an exciting rollercoaster of an ending, oh boy! I was already flying through the book, but that last part made me soar even harder. So much happened. So much rooting, so much laughing, so much cheering.
The ending made me smile! I mean changing the future may not always end in the best results and generally you know is discouraged… BUT in this case, good job Rahul! I absolutely love that he went to make the world a better place and that he got a statue for in the end. Now Pip still has a reminder of Rahul near her (though she could have also taken a picture, haha). I love that Pip can now go outside, go to school, have a fun time. I hope her parents will be kinder. I do hope that Rahul also thought of people who cannot be 100 (or even 50)% vegetararian. I mean, I get you want everyone to stop eating meat, but without meat I would get sick/die. I have so many allergies, I cannot eat nuts, soy, peas, beans are tricky, peanuts are death, and I can keep going. I need meat, be it real or that cultured stuff they are making these days that is practically meat just without killing the animal for it. So I hope he thought about that.

Gunther/his father/and all those other people. We got the right word for that in Dutch, they are wappies. People who believe in conspiracy theories, think the Earth is flat, think there are aliens everywhere, and so on. I wasn’t a big fan of this part, correction, I just wished it would go away, mostly because I have seen too many wappies rise up the last year duo to Corona. These days I just get pissed at seeing those people, given the things they did the past year and the things they said.

So I had tons of fun reading this book. I do think it was hilarious that David Baddiel was like NOPE to Corona but then went with Climate Change as topic. Still, I am glad it wasn’t made to be a giant big deal like some of the kids books these days. Don’t get me wrong, I am all for saving the world, but forcing everyone to be vegetarian/vegan (or make people feel crappy if they can’t), making people feel guilty for using a normal car, or for using plastic is just not the way to go. This book did it the right way. It was there, it was important, but there was no pushing.

2 thoughts on “Review for Future Friend”