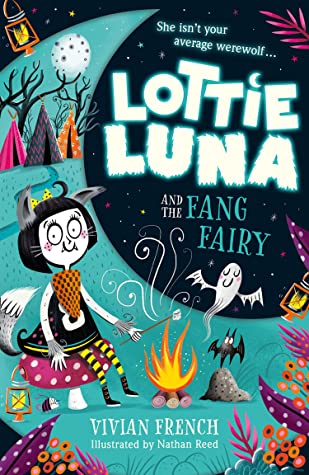 Time to go camping with our crew and their friends! Lottie Luna is back~

Yep, this is the third book. I know. But whereas the first one was pretty great, I wasn’t a fan of the second book when I tried it out. But I wanted to give the series another go and decided to just check out the third book. And I am glad I did. While there was one big thing that I didn’t like (surprise, it is Aggie again) there was plenty I loved to bits!

For instance I was delighted to see Lottie’s family and was happy that she could go camping. I loved the idea of a Tooth party (and I wished I could have had one when I was a kid). But the camping was just the most fun! I love the the kids get close to nature and have a great time finding plants (but no picking them) and finding out new things. Plus, camping is just the best when you can sleep with your friends in one tent! Ah, the nights will not be spend sleeping, haha. I wanted to step into the story and have a great time with these werewolves. Bonfires and s’mores, yas!

Oh, and there were some exciting bits (but also frustrating) at the end!

Jaws is such a cute bat and I love the friendship between Lottie and Jaws. I also like that he keeps an eye out to see if she is happy or not.

But Aggie… Aggie ruined the book. Just in the first book she was just so annoying and so know-it-all, and always had to be the very best. Had to brag. Had to show off. But in this one… she is worse. A little werewolf in the group is about to lose one of his fangs and he is HYPED. Instead being happy for him or cheer, she makes up a gruesome horrible scary story about a totally different fang fairy and totally drives the kid to tears and having the worst time of his life. She even almost causes him to die. So um yeah, she is a shitty character and I would rather she is out of the story. Also I hate how things follow pretty much the same theme as last book. Aggie is crappy, Aggie says sorry, the world is forgiven. But sorry, no. I just don’t get why adults aren’t a bit stricter about things or punish a bit more. Because now it feels like Thea Sisters and Vanilla who always gets away with just an excuse or sometimes even nothing.

But if we throw Aggie of a cliff, then this book was terribly fun! I laughed and I loved the nature trips, the food, and seeing all my favourite werewolves again! The art was just just fun! Hopefully next time Aggie is just magically gone so we can have a fun book with my three favourite werewolves.