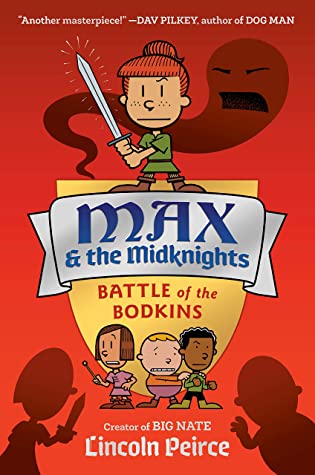 The second book in the series, this time with evil doppelgangers, even more magic, and tons of humour.

Again, I have read this one in Dutch, it isn’t really available in English here. So I will be using the Dutch names. Saying this so that I don’t get a comment that I got the names wrong. Haha.

It all starts off relatively calm, just like the previous book. We see that Sam is now at the knight academy and is trying her best to learn. We see what happened with the others. Ellie is still with Murmelijn and having a great time. Alwin has made a library and a written a book about the adventures of our Midknights. ??? apparently is now doing something with horses, he’s got the skill.
I really liked seeing all the characters again and see what they were doing after the events of the previous book.

And then things get exciting! There is a black book, a bad omen, and then we find out about the evil doppelgangers that lurk in a magical prison somewhere. The adventure and everything surrounding it was just so exciting to read. While you know that good always wins, that just how it goes, there were still enough points in the book that had me doubting if everything would go all right or if things would go very very wrong. I loved seeing the characters think up ideas, make plans, add a new wizard (who thankfully had his eye patch on the right side this time, because we don’t want an incident like at the beginning of the book), and new rides, um creatures. Next to exciting it was also funny. I had quite a few laughs at disguises, things going wrong in silly ways, and more.

I did feel for Sam, though at times I just got a tad tired of her constantly doubting herself. I mean I understand where she is coming from. The guy at the knight school is just the WORST, and yes, it may seem that you aren’t the best, but come on, remember what you did in the previous book. Yes, you worked together, but you did some amazing feats in that one ALONE. And in this one you are also doing some amazing things. I just wanted her to see it. But it took very long and lots of confirmations of her friends and family.

The ending and what was revealed there, OMG, that is terrific! I already had a small inkling something like this may happen given that Sam asked her uncle in the story about how he found her. But I hadn’t expected the story to go the way it did. Now I NEED the third book.

Again, I really like the illustrations. They are silly and a bit weird, but I also like the style.

All in all, GIVE ME BOOK 3!!! Oh, and I would recommend this book to everyone looking for an exciting and fun book to read.