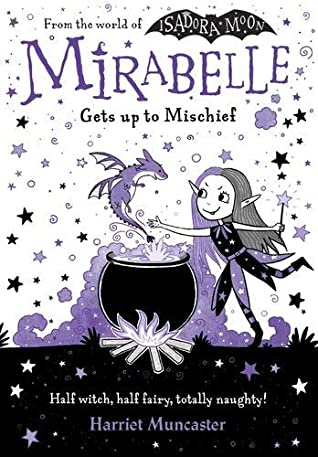 Meet Mirabella, she is half-witch and half fairy! Oh and she gets into a lot of mischief.

I just adore the Isadora Moon series so when I saw that Mirabelle is getting a series of her own I just knew I had to get them. Thankfully, one of my libraries had it in Dutch so I could read it! And read I did and, just like with Mirabelle’s cousin Isadora Moon, I had tons of fun reading this book!

Whereas Isadora is vampirexfairy, Mirabelle is fairyxwitch. Though I have to be honest the only way I saw that this girl was a witch was because of her half pinkish purple/half black hair. Otherwise I would say she is 100% naughty witch. For most of the story she acts like a witch and doesn’t seem to care about her fairy half. In fact it seems she mostly finds it annoying (and well, I kind of can understand given how the dad is so sparkly and way too joyful all the time, I mean, I would also tire of that).

The story takes place for most at a fairy gathering, big fires, lots of cake and glittery food, and tons of sparkles. Of course, Mirabelle cannot resist being naughty and so we get to see what kind of naughty tricks she gets up to.

I am glad that Mirabelle knew she had done wrong and that she confessed. Then again, there was no one else to blame so um, yeah. But still, I had kind of expected Mirabelle to not own up and just make up excuses so I am delighted that despite the naughty witch part and the rebellious witch part that she still knew when to take the blame and say sorry.

What happens next was really fun and I love it. I also love the solution the parents bring as a way of punishment, I think this is a good one. Because she definitely needs to learn responsibility. A lot of it. Haha.

I am happy to see Isadora Moon as well and her family. I am also glad, something that I was worried about due to the Isadora Moon Gets in Trouble book, that Isadora said no and clearly stated her uncomfortableness when Mirabelle asked her to come with her. Good job girl! I am so happy that you can stand up for yourself. I am proud!

All in all, a magical and delightful book featuring a really fun character! And of course wonderful illustrations with tons of glitter and magic! I cannot wait for more books!