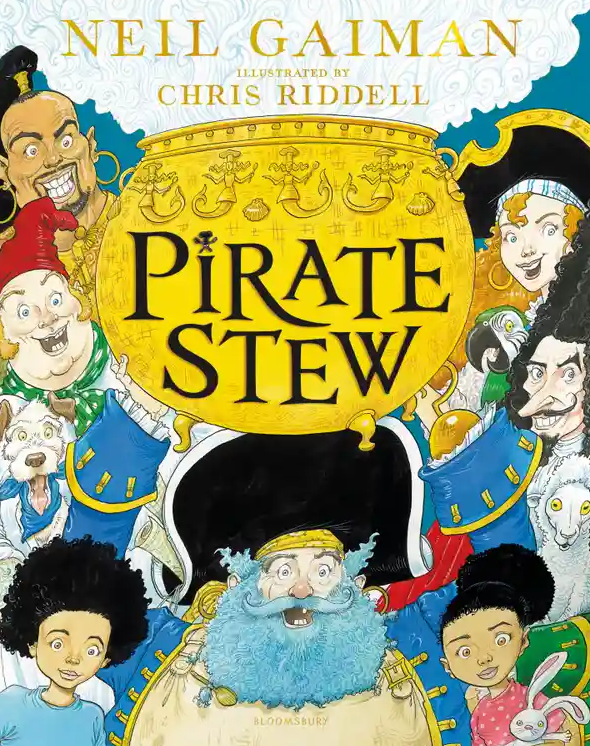 ARRR! Yarrr!! The pirates are here and better be warned so is their stew~ Yohohoho!

So I have been immensely HYPED about this book ever since I found out about it last year. I wanted to read it ever since then, but due to things I had to wait and wait, and then one day I visited one of my libraries, and WOW, it was there! And in English even! I finally could give this book a try.

And what a yohohoho fun book this was. With delightful text by Neil Gaiman and the gorgeous are of Chris Riddell. We read about a pirate cook who is apparently also a baby-sitter. I still don’t know why, but oh boy did I love it! I mean, who wouldn’t want to have a pirate, of course along with his crew because those guys and gals are dropping by as well, as babysitter? I know I would! Especially when it is time for dessert and donuts are on the menu.

I was definitely surprised about the stew. At first I thought, hey, maybe I can make it at home, but in the end some weird stuff went in there. Haha. Plus, you know, pirate stew has some cough extra magical proportions. On the one hand, YAS, on the other hand… maybe not.

I loved the magical evening and I had a big giggle at the end and what happened when the parents came home. I do have to also say that while I giggled, I also went OH NO and that I felt a bit sad for the kids. But it is an ending that befits a book by these artists.

The art was just magical and I love the diversity in the pirates, but then again, you won’t ever hear me say a bad word about Chris Riddell’s art. He just cannot make bad art.

All in all, a fun and magical book about pirates, babysitting, and be warned about the stew!